Marlar outlasts field for $5,000 at Ponderosa 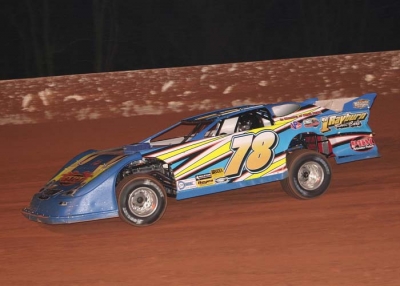 JUNCTION CITY, Ky. (April 5) — Driving the Nicholasville, Ky.-based Estes Automotive house car, Mike Marlar of Winfield, Tenn., etched his name as the inaugural winner of the Chris Estes/Brad Pena Memorial with a $5,000 victory in a caution-plagued event at Ponderosa Speedway. Polesitter Victor Lee was out front for the race's first three cautions, but Lee's flat left rear forced the fourth caution and Marlar was ahead the rest of the race shortened to 30 laps because racing ran so late. | Audio | Ponderosa notebook | Slideshow

“For me, this is the biggest win we’ve ever had," said car owner Steve Estes, the father of Chris Estes, who died in a highway accident last fall. "We’ve had a lot of people have success with us over the years, but this one means the most to me.”

Marlar's most difficult task was staying patient through a variety of race stoppages, including when Aaron Hatton's car flipped in turn four on the seventh lap, bringing out a red flag. Hatton wasn't injured. Marlar and Rohn Moon pulled away from the field on lap 22, the only time the leaders worked lapped traffic, but Moon lost second to Duane Chamberlain on a lap-25 restart. Moon spun with a flat tire on lap 27 and Chamberlain pulled off under caution, also with a flat.

Notes: Marlar's No. 78 Rayburn Race Car is powered by an Estes Race Engine and sponsored by Estes Automotive, PBM Performance Products, Dyer’s Top Rods and VP Racing Fuels. ... Second-running Michael Chilton spun with a flat tire on the lap-seven restart. ... Joey Daniel raced from 18th to sixth and his hard charger honors earned $100 from Clayton Homes. ... Victor Lee's fast time of 12.744 seconds lowered the track record previous held by Tim Tungate. ... Among drivers failing to make the feature: Eric Wells, Jordan Bland and Chris Combs. ... The event was originally scheduled for 50 laps, cut to 40 before it began, then cut further to 30 because of the frequent cautions and late hour. .. Nine drivers finished the 90-minute feature. ... More than 4 inches of rain fell in the 48 hours preceding the race and track officials took three breaks to work on the choppy conditions. ... Reigning track champ P.J. Feistritzer captured the Crate feature over his father, Paul. ... The track's planned April 4 racing was rained out. (Additional information from Mike Sullivan)