Ogle fights off Crabtree for Ultimate win at 411 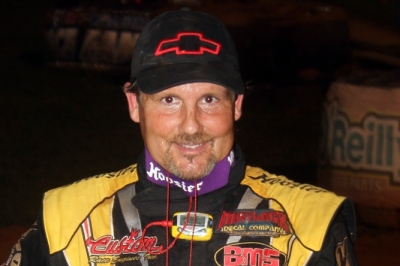 SEYMOUR, Tenn. (May 25) — Polesitter Billy Ogle Jr. of Knoxville, Tenn., overtook fellow front-row (and unrelated) starter Chad Ogle of Sevierville, Tenn., on the seventh lap and held on the rest of the way Friday at 411 Motor Speedway.

“We finally got a win this year,” Ogle said in victory lane. “We’ve had a few get away from us. I’m just finally glad we got this one. It may turn things around for us.”

David Crabtree of Maryville, Tenn., challenged the winner late in finishing second while Chad Ogle, Ultimate’s May 5 winner at Volunteer Speedway in Bulls Gap, Tenn., was third. Ivedent Lloyd Jr. of Ocala, Fla., and Mark Vineyard of Knoxville rounded out the top five finishers in the 24-car field.

Chad Ogle used his momentum on the high side to grab the early lead with Billy Ogle in hot pursuit. Just before a caution for a slowing Riley Hickman, Billy Ogle made an inside pass exiting took four to take command.

Crabtree powered around Chad Ogle on the restart to get the second spot and began a relentless pursuit of the leader, throwing up clouds of dust in turn two as he nearly scraped the wall each lap.

Although he briefly lost the second spot to Chad Ogle on a later restart, Crabtree again moved into second and maintained pressure while vainly trying to find a way past the leader.

“I started feeling like I was losing my tires or something, because I was really struggling toward the end and I felt like I heard somebody behind me, so I believe they closed up on me. I’m just glad it’s over,” Billy Ogle said. “They told me under caution that he was kind of closing on me before that last restart, and I really tried to put together some good laps there and tried to get back away from him and maybe be able to keep my distance until the checkers, and I was able to hang on.”

Crabtree struggled in getting past the lapped car of Matt Henderson, costing him time in his pursuit of the lead.

“We caught him. I thought in lapped traffic we might get him. ... It seemed like when I slowed down and quit overdriving the car, I could run him down a little bit,” Crabtree said. "I just didn’t have enough for him.

“We run here almost every week, so we kind of got an little bit of an advantage, maybe. We ran good. I’d like to have won it, but we’ll take second.”