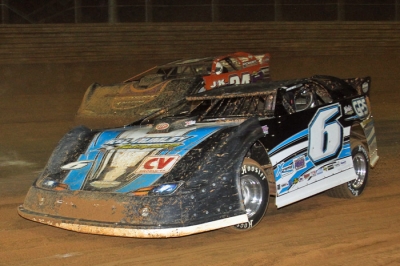 JAMAICA, Va. (May 19) — After and up-and-down start to the season, Steve Shaver of Vienna, W.Va., broke through for his first 2012 victory Saturday night at Virginia Motor Speedway, earning $10,000 in the half-mile oval’s Mid-Atlantic Spring Championship.

The seventh-starting Shaver charged forward in the second half of the 50-lap race and outdueled outside polesitter Jeremy Miller of Gettysburg, Pa., in a late battle to win the Ultimate Super Late Model Series event. | Video

After biding his time during the race’s early portions, Shaver got rolling midway through the race, passing both Chris Ferguson of Mount Holley, N.C., and polesitter Chris Madden of Gray Court, S.C., on a restart to move to third.

After moving by Dale McDowell of Chickamauga, Ga., for second on lap 21, Shaver caught Miller by lap 29 and began working the low groove to find a way around. He edged ahead of Miller to lead lap 35 as the two drivers battled through lapped traffic, but Miller pulled back out front the following lap.

As the laps began to wind down, Shaver began working a higher line on the racetrack and used a strong move on the top entering turn three on lap 47 to pull alongside Miller in turn four. Shaver edged ahead in turns one and two the following lap and completed the pass down the back straightaway.

Miller, who grabbed the lead on the start of the race over Madden, settled for the runner-up finish after controlling much of the distance. Dale McDowell of Chickamauga, Ga., finished third with fast qualifier Rick Eckert of York, Pa., fourth and Jamie Lathroum of Mechanicsville, Md., fifth.

Madden and Ferguson both started in the top four after winning their heat races, but Madden dropped out midway through and Ferguson faded in finishing seventh.

Among the race’s caution was a turn-two pileup midway through the race the was spurred by contact between Jason Covert of York, Pa., and Kenny Moreland of Waldorf, Md., as the two drivers exited turn four. The contact got Moreland out of shape down the front straightaway, and more contact between Moreland and Ricky Elliott of Seaford, Del., sent Elliott for a spin with four other cars getting collected in the ensuing scramble.

Notes: Shaver's K&L Rumley Motorsports Rocket Chassis is sponsored by GPS Supply Company, CV Products, Sunoco Race Fuels and Hoosier Racing Tires. … Shaver scored to victories at VMS last season, another $10,000 Ultimate victory and the $25,000 Commonwealth 100. … Shaver started from the front row of this year’s Commonwealth 100 in April, but was never much of factor in finishing sixth. … Series points leader Casey Roberts of Toccoa, Ga., finished 10th. … Madden won the Ultimate tour’s first event of the weekend, picking up $4,000 at County Line Raceway in Elm City, N.C. … The Ultimate Series returns to action with a Tennessee doubleheader May 25-26 411 Motor Speedway in Seymour and Smokey Mountain Speedway in Maryville. Both races pay $4,000 to the winner.