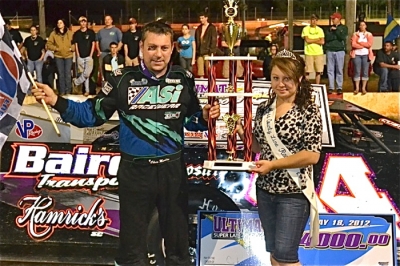 ELM CITY, N.C. (May 18) — Chris Madden made his first trip to County Line Speedway a successful one with a dominating performance in Friday night’s Ultimate Super Late Model Series event at the tight 3/8-mile oval.

The polesitting Madden of Gray Court, S.C., outdueled fellow front-row starter Benji Cole on the start of the 40-lap race and led the entire distance for his second series victory of the season. | Video

Series points leader Casey Roberts of Toccoa, Ga., followed Madden across the line in the second position with Dustin Mitchell of Lucama, N.C., third. Cole of Cannon, Ga., slid back to the fourth position at the finish with Russel Erwin of Syracuse, N.Y., rounding out the top five.

Madden cruised for much of the distance, never feeling very serious pressure as he successfully managed slower traffic and conserved his tires.

“We had to qualify good tonight and start up front to have a shot at winning this thing, but we still had a lot left in the tank. That sucker was fast,” Madden said of his Bloomquist Race Car. “It’s the first time I’ve ever been here. It’s a neat place, kinda unique. It looks small, but it drives big.”

Roberts, who’s still looking for his first victory of the season, survived a mid-race tangle with a lapped car that hampered the steering on his Capital Race Car and held on to extend his points lead with the runner-up effort.

“We wasn’t too bad and in that lapped traffic deal we wound up getting by Benji,” Roberts said. “It’s just so hard to pass. We got our steering goofed up there when we got into a lapped car.

“We’re not a long way hopefully from a win. We’ve been knocking on the door. We’ve been running consistently good. It’s just a matter of time hopefully before we can put a win together.”

Notes: Madden's Bloomquist car is powered by a Cornett Racing Engine with sponsorship from Baird Transport, Century Plastics, Hamrick's of Gaffney, Extreme Custom and Cycles, Elite Concrete and KC Transport. … Madden’s previous 2012 Ultimate victory came April 6 at Cleveland County Speedway in Lawndale, N.C. … The win is Madden’s sixth of his career on the Ultimate Series. He leads the series all-time win list by two wins over Jonathan Davenport of Blairsville, Ga. … The victory is the second in a row for Madden, who won a World of Outlaws Late Model Series event at Swainsboro (Ga.) Raceway in his previous outing. … The Ultimate Series moves to Virginia Motor Speedway in Jamaica, Va., Saturday night for the $10,000-to-win Mid-Atlantic Spring Championship.