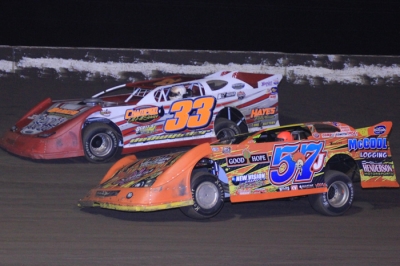 Starting from the inside of the second row, McCool, who leads the WoO tour’s rookie chase with one series victory on the season, wasted little time getting to the lead. He grabbed the top spot early in the race and was out front when light sprinkles turned to heavy rain, forcing track and series officials to axe the remaining 34 laps of the scheduled 50.

McCool was declared the winner, giving him his second consecutive victory on the tour and seventh overall. The victory is also his second straight at Greenville, where he won the $7,000 Gumbo Nationals in his previous visit to the quarter-mile oval in November.

"It means a lot to us to get a win up here, since we are on a break from the national tour (of the World of Outlaws),” McCool said. “We have a lot of fans up this way, a lot of people that follow me, so that alone means so much to our team. I believe this is the first race I have won under rain, we started third and we kept digging around that bottom line and just got by them boys.

"We freed up the car a little more for the feature, than what we had in the dash race. We were a little too tight in the dash, I thought we had a pretty good car and the bottom hadn't really come in yet. We freed it up some and it seemed to work with what we wanted to do, to get to the front early."

Polesitter Rick Rickman of Columbus, Miss., took second place, while Jeremy Broadus of Biloxi, Miss., climbed from his ninth starting spot to finish third. The result was good enough to elevate Broadus into tie for the points lead with fourth-place finisher, Scott Dedwylder of Vossburg, Miss., who lowered the track record in turning the fastest qualifying lap. Cliff Williams of Star, Miss., earned the race’s hard-charger award, advancing from his 14th starting spot to round out the top five finishers.

It didn't take but one corner for the initial green flag to turn into a yellow, when track champion, Mike Palasini Jr. of Leland, Miss., climbed the turn two concrete wall, slowing the field down. Palasini's car rode the wall around the turns, before dropping back onto the speedway, collecting Ross Camponovo of Clarksdale, Miss., and Jamie Elam of Senatobia, Miss.

Elam would be able to keep going and resume his starting position, but Palasini and Camponovo's night would come to an end.

On the restart, Dedwylder led Rick Rickman, McCool, Elam and Clay Fisher of Dewitt, Ark., on the first lap. McCool passed Rickman for second and engaged Dedwylder for the lead on lap three.

McCool edged Dedwylder by a nose at the line, but a second yellow would fly before a laps was completed, giving the lead back to Dedwylder.

The two drivers battled side-by-side once the race went back green and soon began lapping slower cars. McCool would make the pass on Dedwylder in turn two, to seize control of the race.

Rickman pressured Dedwylder for second as McCool slipped away from the rest of the pack on lap seven. Just as McCool secured control, the race's third yellow bunched the field back up.

Dedwylder slipped back a position with Rickman reeling in McCool, only trailing by five lengths, just 10 laps into the feature.

McCool lead Rickman by a second-and-a-half, when the drizzling rain turned into a perpetual downfall on lap 16, summoning a decision discussed between co-track owner James Clolinger and MSCCS official Don Thrash to call the feature and awarding the win the McCool.

Notes: McCool’s Victory Circle Race Car is powered by a Jay Dickens Racing Engine with sponsorship from McCool Logging, Henderson Motorsports, Southern Belle and Laird Lumber. … The victory, McCool’s eighth on the MSCCS tour, follows his March 24 triumphant in the tour’s event at Whynot (Miss.) Motorsports Park. ...... Both Dedwylder and McCool shattered the track record in qualifying. ... Rick Rickman topped Dedwylder and McCool in the dash to earn the pole for the feature. … Greg Fore's Greenville Speedway track record set two years ago of 13.78 seconds, was topped by the top four qualifiers. ... The rain-shortened race was the tour's 11th visit to the quarter-mile gumbo oval, that has spawned a different driver in victory lane the last nine MSCCS appearances — only McCool and David Breazeale of Four Corners, Miss., have been repeat winners at Greenville in the series. ... The series moves to Jackson Motor Speedway in Byram, Miss., May 19 for another $2,500-to-win event.