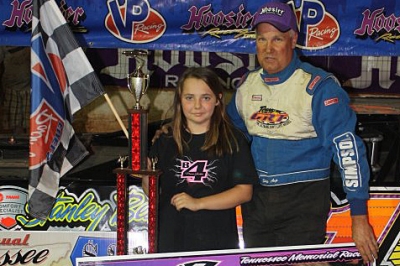 Haley Brooks, who has a rare form of cancer, posed with Skip Arp in victory lane. (Ronnie Barnett)

Arp won the caution-free 40-lap Tennessee Memorial over reigning series champion and polesitter Billy Ogle Jr. of Knoxville, Tenn., to become the fourth winner in four 2012 races on the series.

William Thomas of Phenix City, Ala., took third from Ray Cook of Brasstown, N.C., on the final lap while Jake Knowles of Tyrone, Ga., rounded out the top five. Randy Weaver of Crossville, Tenn., who entered the event leading SAS points, was sixth.

Arp’s victory is the ninth of his career on the circuit and first since Aug. 23, 2008, at Dixie Speedway in Woodstock, Ga.