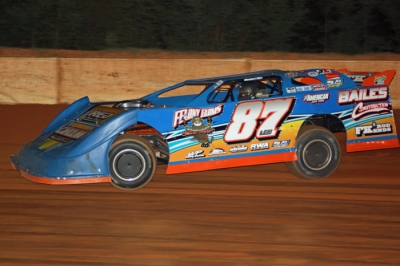 GASTONIA, N.C. (May 11) — Ross Bailes fought off repeated challenges from fellow Clover, S.C., driver Johnny Pursley on Friday at Carolina Speedway for a $4,000 victory on the first-year Battle of the Eastern All Stars Tour.

Pursley dove inside Bailes in turn three after a restart with five laps to go, making slight contact in trying to make the purse. Bailes survived while Pursley tried it on the high side two laps later. | Slideshow | Video

While Franklin ended up facing the wrong way, the contact helped Pursley regain control and retain the second spot for the final restart.

Pursley again pressured Bailes after the final restart, but Bailes fought him off to win the race to the checkers.

The series-points leading Pursley, who started on the front row alongside Bailes, settled for second while Luke Roffers of Concord, N.C., finished third. John Pursley, the runner-up’s father, was fourth and Ricky Weeks of Rutherfordton, N.C., rounded out the top five.

Franklin ended up 13th while Casey Roberts of Toccoa, Ga., who was running among the top five when he slowed to draw a mid-race caution and departed, was 17th.

Notes: The 22-year-old Bailes drives a Ronnie McCarter and Todd Bailes-owned No. 87 MasterSbilt Race Car with sponsorship from Bailes Construction and Carolina Fire & Security. ... Runner-up Johnny Pursley drove the No. B4 owned by Bobby and Johnny Wilson that Bailes has driven in the past. ... BEAST competitors return to action June 12 at Laurens County Speedway in Laurens, S.C.