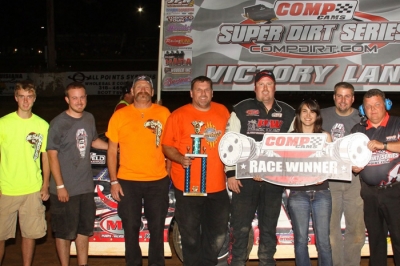 The second-starting Bagley grabbed the lead over polesitter Rob Litton of Alexandria, La., on the start of the 35-lap race and ran mostly unchallenged throughout the duration of the caution-free race.

While Bagley pulled away, a driver on the move was 12th-starting Billy Moyer Jr. of Batesville, Ark., who advanced into the top five by the race's midway point. He raced his way into the second spot later in the race, but was unable to catch the leader as Bagley went on to claim the win.

Moyer was solid in the runner-up spot at the finish while a tight battle for third raged behind him. Kyle Cummings of Minden, La., topped Chris Wall of Springfield, La., and Litton for the position.

Notes: Bagley's Wayman McMillan-owned Rocket Chassis is sponsored by P&W Sales, Directional Drilling Company and MSI Pumps, Valves and Manifolds. ... The event was the tour's only apparence at the quarter-mile oval on this year's schedule. ... Moyer earned the Larry Shaw Race Cars Hard Charger Award for his 12th-to-second run. ... The Comp Cams tour has a doubleheader May 11-12 with $2,000-to-win events at Thunderbird Speedway in Muskogee, Okla., Friday night and Crawford County Speedway in Van Buren, Ark., Saturday night.

Correction: Fixed misidentification of Zack McMillan (14z) as Morgan Bagley in two photos in the slideshow.