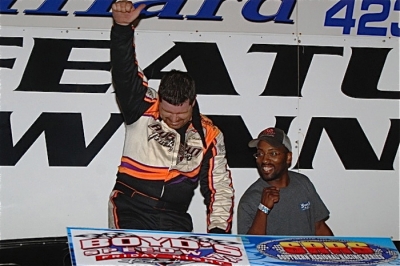 RINGGOLD, Ga. (May 4) — Riley Hickman of Ooltewah, Tenn., overtook race-long leader Skip Arp of Georgetown, Tenn., on the final lap of Friday night’s Southern Regional Racing Series event at Boyd’s Speedway, nosing ahead by less than a car length at the finish line. Hickman earned $3,000 for the second series victory of his career. | Slideshow

Starting from the second position, Hickman slid back to fourth early in the event, but recovered to chase down the polesitting Arp late in the 30-lapper.

Hickman dove under the leader entering turn three on the final circuit and another push by Arp exiting tour four allowed Hickman to edge ahead by half a car length at the finish line.

“We were pretty hard on tire and at the start of the race, and I was sitting there thinking we were a sitting duck,” Hickman said in victory lane at the third-mile oval. “The longer we run, we were a little better than (Arp) was. … Lucky enough he started shoving the nose a little bit and our stuff got better. I got there on the last lap and he slipped up a little bit. We where there and capitalized getting off (turn) four.

“This really helps us out in the points chase,” added Hickman, who’s chasing the championship on the regional tour this season for the first time. “We started off with a pretty good run at Phenix City, and then we’ve just been kinda snake bit over at Clarksville and Sugar Creek. Hopefully this’ll get the monkey off our back.”

Chip Brindle of Chatsworth, Ga., ran second early in the race, but slipped back to third at the finish while Randy Weaver of Crossville, Tenn., crossed the line fourth. Jason Welshan of Maryville, Tenn., was fifith.