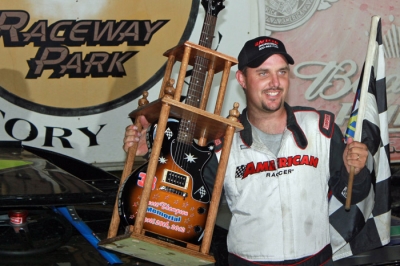 GIBSONTON, Fla. (April 28) — Mark Whitener of Middleburg, Fla., proved he had no intentions of taking Saturday night's Scott Thompson Memorial lightly, leading every competitive lap he ran in the unsanctioned event at East Bay Raceway Park including all 50 laps of the $3,800-to-win main event. | Slideshow

A last-lap caution in the feature gave Josh Peacock of Dover, Fla., a final shot at the leader, but Whitener showed no mercy as he again baffled the field to earn a convincing victory in a race honored one of his former competitors.

Whitener, who also dominated his heat race during the night’s preliminary action, seemed to have no problems all night, but the night was filled with plenty of them otherwise. An ever-present chance of rain threatened to wash out the night’s action and when the main event finally got rolling, it was slowed by 10 cautions.

The most notable of the yellows was caused when outside polesitter Phillip Cobb of Apollo Beach, Fla., tangled with Mavrick Varnadore, sending Cobb around and causing a melee behind him.

Peacock had to work his way to the front, but once he gained the second position from Varnadore just before halfway, he nestled himself nicely to secure the runner-up finish.

Varnadore crossed the finish line third, but was disqualified after his race car didn’t meet minimum post race weight. Fourth-finishing Jeff Matthews of Dover, Fla., was elevated to third while Doug Horton was among the night’s biggest movers, advancing from 13th starting spot to end up just outside of a podium finish in the fourth position. Jeff Koller survived an early spin and rallied back to secure a top five finish.

Notes: Whitener’s Big Frog Motorsports Barry Wright Race Car is powered by a Koury Engine with sponsorship from Dave’s Towing, Antis Roadside Service and Towing and Hi-Way Automotive. … Cobb posed the only threat of the night to Whitener’s when he nearly spun Whitener in the first turn at the start of the feature. … East Bay regular Roger Crouse avoided trouble in advancing from 16th to seventh. … Doug Watson has a strong heat race run, but was never factor in the feature after early contact; he finished 12th.