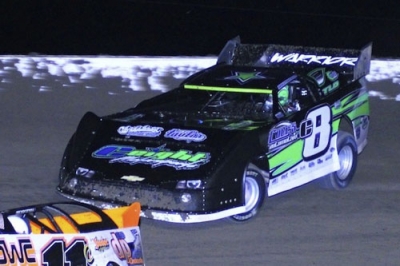 GREENVILLE, Miss. — Saturday’s Southern United Professional Racing Series event was the first touring race at Greenville Speedway of the season, and one thing was virtually certain: No driver would experience what Jeff Chanler remembers happening in a previous visit to the quarter-mile gumbo clay oval.

“I have flipped over the top here at Greenville before coming off turns three and four,” Chanler said. “It is a long way down!”

But with the off-season addition of a concrete wall encompassing the track owned by James Clolinger and Wesley Washington, no driver would meet such a fate at the SUPR event won by B.J. Robinson of Shreveport, La.

In the previous five years under Clolinger-Washington promotership, the outer banking of the track was open down the backstretch and on both ends, making a steep decline down the opposite side of the track. To improve safety, the promoters added the wall with a month-long project completed in early March. Drivers were happy with Greenville's new addition.

"It is definitely a lot safer here with the wall in place at Greenville,” Robinson said. “There are quite a few flips here normally when there is just a berm right around the top.”

Added Chanler: "I would rather run with the wall at Greenville, I like it better here now, it gives you something to go by. If you don't have a wall, then we have seen it before what happens, you are going over the top!”

Some drivers discovered the wall the hard way, including Chad Thrash of Meridian, Miss., when he got too high while battling Derek Perkins in a heat race. But Thrash survived the contact and, like any rim-riders at Greenville, will have to make adjustments with the facility’s improvement.

"The wall didn't bother me. I mean, we got up there and got pretty acquainted with it probably more so than anybody here tonight,” said runner-up Chris Wall of Springfield, La. "We have only raced a few times here at Greenville before this and everybody we like 'Oh! The change in the wall here now.' But we run enough racetracks where you are up there scraping the wall anyway, so it is what it is. You just get up there, adapt to it and git-r-done!”

Once a revolving door for multiple drivers, the Childress Racing Team of Haughton, La., is as focused as ever after pulling off a 1-2 finish with B.J. Robinson and Chris Wall at Greenville Speedway, a rare feat in a regional event.

"I am proud of this team,” team owner Raymond Childress said with a smile. “Now if we can figure out how to cross the finish line at the exact same time together!”

While Kyle Cummings successfully drove the lone team car starting in ’07, in recent years Josh Danzy, Chad Dupont, Jay Brunson and others have made starts with Childress, including NASCAR Nationwide driver Justin Allgaier’s showing in last year’s Prelude To the Dream.

Robinson, an up-and-coming Late Model driver, and Chris Wall, a veteran with national touring experience, have settled into the team cars this spring after Brunson and Dupont made brief early-season appearances. A nagging back injury forced Danzy to trade his helmet for a wrench, and he now serves as crew chief. The team seems to be coming into its own.

"It's an excellent opportunity getting into the situation that I am in with this racing team, just awesome,” said the 44-year-old Wall, who jumped at the opportunity after shutting down his self-owned team last fall. "It's been great with Josh here taking care of the cars during the week, it really opens up the time for me to share with my family and then come here to take care of business.”

While the younger and less-experienced member of the team, Robinson isn’t overshadowed. After picking up his first Late Model victories last season, the modified graduate who works at the Stuckey Enterprises race shop added the victory in Greenville, the first for the Childress team in 2012.

"This certainly is lifting for this team. Wall brings a lot to the table as far as tire selection and the way the tracks are,” Robinson said, who is quick to credit Raymond Childress and his wife Cathy along with Danzy and all the team’s supporters. "The (races) that Chris has been to before, because he has raced at a lot of different racetracks in his career, is just so helpful. And when we swapped over to MasterSbilt Cars, he has a tremendous amount of input on those, because that is what he has raced with for so long.

“Another advantage with a teammate of the caliber of Chris, is you can bounce questions and ideas that you have had off of him. For the most part, if he hasn't tried it, then he is willing to try it. If Chris comes up with something that he feels is a little bit better, then he will share the information with you.”

The future is bright for the team that, besides regional SUPR and Comp Cams Super Dirt Series events, plans to compete in Lucas Oil Late Model Dirt Series events in Wheatland, Mo., and Batesville, Ark., along with major events at Ohio’s Eldora Speedway, where Allgaier will again pilot a team car at the Prelude.

In a surprising development, Kyle Cummings of Minden, La., replaced Chris Holley of Dayton, Texas, in the No. 28 Erb Racing Team car at Greenville. Holley had been second in SUPR points after three series races.

Cummings, who finished sixth, made just his third Late Model start over the past calendar year. He most recently scored a third-place finish in SUPR action last July at Champion Park Speedway in a benefit race for his late father Rusty, the former SUPR champion who died of Lou Gehrig’s disease.

A schedule conflict with work will keep Cummings out of the Erb car for April 28’s SUPR event at Jones Motor Speedway, but car owner Mark Erb said the team plans on adding another car soon for his teen-aged son Tyler, who has had success in limited modifieds and street stocks.

Rob Litton of Alexandria, La., rebounded from engine woes for a fifth-place finish at Greenville, increasing his SUPR points lead. He’s been in the top five in the last four series visits to Greenville. ... Rookie Shane Hebert, who won his first-ever Late Model start April 7 at Boothill Speedway, started on the front row at Greenville but retired early with left-front suspension damage. ... Derek Perkins of Oakdale, La., was the hard charger at Greenville with a 21st-to-ninth run and is third in series points. ... SUPR has had no repeat winners heading to April 28’s event in Chatham, La.