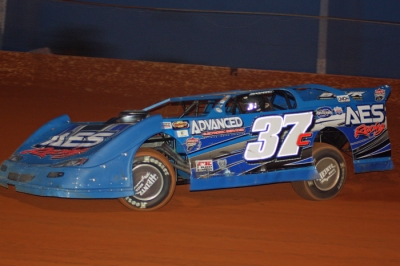 GAFFNEY, S.C. (April 21) — Edgar “Rock” Gault was known for his meticulous and methodical track surface preparation at Cherokee Speedway. On a night set aside to celebrate his memory, he surely would have been proud to hear the winner of the race give “kudos” to the track prep crew. | Slideshow

“This is the first time I have seen this place this good in a long time,” winner Dennis Franklin of Gaffney, S.C., said after his flag-to-flag victory in the third annual Rock Gault Memorial. “(Track owner Lennie) Buff really had this place excellent. I mean, it got a little choppy there getting into (turn) one, but other than that it was perfect. You couldn’t ask for no better.”

Franklin’s $4,000 victory came in the first-ever race on the Battle of the Eastern All Stars Tour (BEAST) as he drove his Steve and Leslie Cook-owned No. 37c to victory at the 4/10-mile oval.

“We have struggled here for the last two years, and we changed everything under this car this week,” Franklin said. “Me and daddy (crew chief Dick Franklin) talked about it, and we came here with a totally different setup. It was fast right out of the box.”

Franklin, who started on the front row with fast qualifier Johnny Pursley of Clover, S.C., took the checkers ahead of Clover while Casey Roberts of Toccoa, Ga., was third. Chris Madden of Gray Court, S.C., and Dustin Mitchell of Pine Level, N.C., rounded out the top five.

With Pursley electing to start outside the front row, Franklin drag-raced him into turn one. Exiting the second corner, Franklin had a half-length advantage and by the time the he had reached the third corner, he had secured the top spot.

Off the fourth corner and down the front straightaway, Franklin stretched his lead to a couple of car lengths by the time he reached the flagstand. Besides his pace being slowed a bit while negotiating lapped traffic in a race that ran caution-free, he was never seriously challenged and won by nearly a straightaway.

Notes: Franklin’s Barry Wright Race Car is powered by a Clements Racing Engine and sponsored by AES Racing. ... BEAST has 11 dates on its schedule, including its second stop April 28 at Gordon Park Speedway in Grovetown, Ga., for the Jack Starrette Memorial. ... The tour allows both American Racer and Hoosier Racing Tires (Franklin used Hoosiers). ... Jeff Smith’s No. 18 suffered an engine failure during hot laps, while John Henderson Jr.’s No. 2x had mechanical woes during qualifying; both scratched for the night.