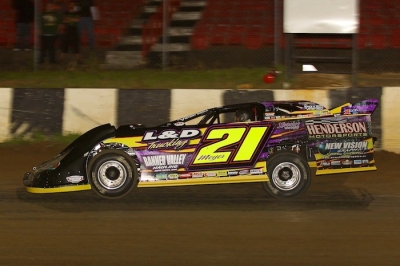 Billy Moyer lapped all but six drivers in his 30-lap victory. (Woody Hampton)

Rallying from the tail of a heat race to win the prelim, the 54-year-old Moyer earned the pole for the main event and led all the way in a race slowed by a single yellow. Moyer lapped all but six competitors in winning his second series event of the season and sixth of his career. | Slideshow

The lone caution appeared on the first lap when series rookie Chandler Petty of Austin, Ark., jumped the cushion in turn-two and smacked the wall.