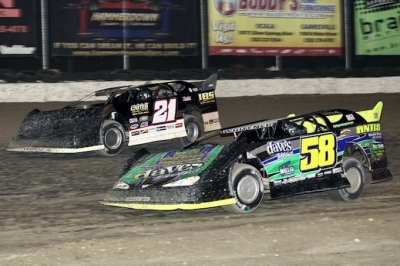 Tyler Ivey of Tallahassee, Fla., took the checkers second with Jack Nosbisch Jr. of Riverview, Fla., in third. Keith Nosbisch of Valrico, Fla., and Jeff Mathews of Tampa roundout out the top five in a 50-lap race slowed by five cautions.

Kyle Van Sickle of Jacksonville, Fla., who led UDLMCS points entering the weekend, drew the first two cautions with spins and ended up last in the 20-car rundown.

Mark Whitener of Middleburg, Fla., got the jump at the outset, but Lloyd went ahead on the eighth lap for four circuits before Whitener briefly regained control.

Lloyd was ahead when Jason Burke's turn-two spin slowed the action, but Whitener didn't give up, going back ahead on lap 24 for four more circuits. But Lloyd took the lead for good on lap 28, and Whitener's race ended with mechanical trouble on lap 41. Lloyd pulled away over the final nine laps for his series-leading 15th career UDLMCS victory.