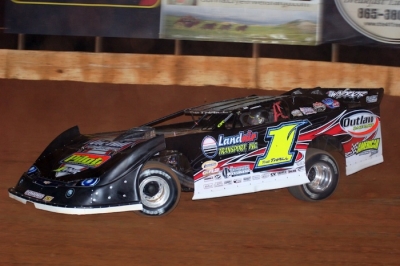 MARYVILLE, Tenn. (April 14) — On opening night at Smoky Mountain Speedway, and only the second race on the Southern All Stars Dirt Racing Series, Vic Hill of Mosheim, Tenn., looked like he was in midseason form Saturday in dominating all 50 laps for a $5,000 victory. | Video | Slideshow

Hill started on the pole and was never challenged at the 4/10-mile oval in racing for his second career series victory and first since 2003. Cautions were the only things that kept competitors within striking distance in the 50-lapper, but Hill pulled away on each restart.

"I did the same thing every time," Hill said. "There was a little red streak of traction and I'd just run up in the corner and drive across it and take off, because I knew I was going to have to deal with the rough track down here in the bottom in (turns) one and two. You never know if you hit a rut the wrong way, somebody might go by you if they're right on your tail, so I had no idea. I was just trying to get good starts."

The east Tennessee engine builder thanked shop worker Jason for helping with the engine that powered his Warrior Race Car to victory.

"That engine was definitely awesome tonight," Hill said. "This is a big racetrack and you can show a little power and car. You've gotta have the whole combination here, and it just worked out well for us tonight."

Hill jumped out to a straightaway lead by the seventh lap while hometown driver Tommy Kerr, his teammate Billy Ogle Jr., Mark Douglas and Randy Weaver vainly tried to keep up.

Ogle took the second spot amid traffic on the 19th lap, and while he made up some ground on the leader as Hill battled slower cars, a lap-23 caution for a Robby Mosses spin gave the leader room to pull away again.

After the race's final caution for Chad Ogle's lap-42 flat tire, Hill pulled away while Weaver swapped second spot with Billy Ogle Jr. in the final laps. Ogle secured the runner-up spot when Weaver slowed with mechanical woes heading for the checkers, dropping him to sixth in the final rundown. Kerr was third followed by Cook and Douglas.

The most serious accident came on the race's first start attempt for a turn-one pileup back in the pack. David Crabtree, Josh Henry, Mark Vineyard, Brett Miller and Jeff Wolfenbarger suffered varying degrees of damage in the melee.

Notes: Hill's Warrior Race Car has a Vic Hill Racing Engine and sponsorship from Landair Transport, Outlaw Race Parts and Pilot Travel Centers. ... Hill's only other Southern All Star victory came Oct. 18, 2003, at Volunteer Speedway in Bulls Gap, Tenn. ... Hall of Famer Ronnie Johnson of Chattanooga, Tenn., won a consolation race in the Warrior Race Cars house car, but engine problems prevented him from starting the main event. ... Next up for the Southern All Stars is a $3,500-to-win event on May 5 at Talladega Short Track in Eastaboga, Ala.