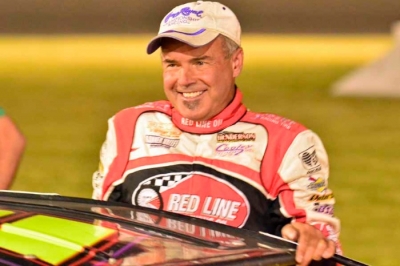 COLUMBUS, Miss. (April 14) — Billy Moyer led every lap of Saturday night's Spring Throwdown feature at Magnolia Motor Speedway, but claiming the victory was far from easy for the veteran driver from Batesville, Ark. Moyer survived contact with a spinning lapped car and turned back a pair of late challengers on his way to earning an $8,000 payday on the second night of Magnolia's inaugural two-race event. | Video | Slideshow

Starting second in the 50-lapper, Moyer pulled ahead of polesitter Scott Dedwyler exiting turn two on the opening lap and led the early portions of the race unchallenged until a spin by Stacy Caldwell on lap 19 brought out first of the race’s two cautions. Moyer was nearly caught up in the spin and made contact with Caldwell as he squeaked by and avoided significant damage.

Moyer later held off late charges from a pair of Louisiana drivers in topping Chris Wall of Springfield and Ray Moore of Shreveport for his ninth victory of the season and third in a row. Moore finished second with Wall third while Ronny Lee Hollingsworth of Northport, Ala., was fourth with Neil Baggett of Shannon, Miss., rounding out the top five.

“I hit him pretty good there but it didn’t hurt anything too bad,” Moyer said of his contact with Caldwell. “That was a scary moment there for a minute. Luckily we stayed out of chaos.”

Moyer, a National Dirt Late Model Hall of Famer, picked up the victory in the home state of two of his biggest sponsors, Henderson Motorsports and Cooley Transport.

“It’s big to win down here where the Henderson’s are from.” Moyer said. “Leon (Henderson) and Leon (Henderson) Sr. help me tremendously, along with the Cooleys. I couldn’t do this without those guys; they make it all happen for me.”

After dominating the early portions of the event, Magnolia’s slick surface became one-grooved late in the race and heavy lapped traffic allowed Wall and Moore to erase Moyer’s lead.

Pulling within a car length of Moyer on lap 40, the third-starting Wall moved up a groove to try to make a pass for the lead. The effort was costly, however, as Moore took advantage by pulling alongside him before completing the pass for second three laps later.

“We didn’t come here to run second or to run third,” Wall said of the move that cost him a position. “We’re proud of our run; we went for the win and it cost us a spot.”

After settling into second, Moore pulled alongside Moyer exiting turn two on lap 47, but fell back in line as the two made their way into turn three. That was as close as he Moore got to taking the lead as he followed behind Moyer for the final two laps and settled for the runner-up finish.

Following a rough start to the season, the 10th-starting Moore was satisfied with his runner-up finish.

“It almost feels like a win,” Moore said. “We’ve been crashing almost every week so I certainly wasn’t going to wreck him. We were getting better and better every lap. I was hoping he’d try to move up to the top but he made the right move”

Moyer, who was trying not to be too aggressive in lapped traffic, was pleased with the respect Moore and Wall showed while racing among tight quarters late in the race.

“The racetrack was pretty much blocked. I was just bidding my time just trying to keep the nose of the car from rubbing those guys in front.” Moyer said. “The 93 ran me clean. Everybody had respect for one another and we made it through to the end.”

After winning Friday night’s $2,000 Spring Throw Down opener, Hollingsworth settled for a fourth-place finish to close out the weekend with a pair of top-five finishes. The pole-starting Dedwyler ran among the leaders early but faded to an eighth-place finish.