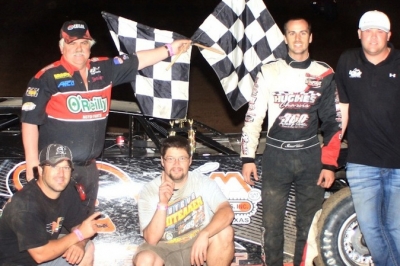 Rallying from his eighth starting spot on a night when Boothill drew a solid 39-car field, the 32-year-old Hebert overtook race-long leader Steven Whiteaker Jr. after 10 laps and and finished comfortably ahead of the 20th-starting Culp at the checkers.

Hebert's debut in his No. 9 Pierce Race Car was a huge success, although the modified racer wondered if his plan to try another division had backfired when he pulled into the pits.

"My idea was to get into this Late Model deal because they were having from anywhere to the upper teens to the mid-20s of these late models show up at an event," Hebert said. "So we thought about it last season and said we would get a Late Model, since it is $400-to-start (per race) and less traveling on us.

"Then lo and behold, we show up here for the first time and forty cars are here! That is a different deal than what we figured, but we got on that top side tonight, although the car was good on the bottom and on the top. Since most everyone else was naturally on the bottom, we did the opposite of what they all were doing and it worked out for us.

"I believe the modified skills in me came out of just trying to keep the car straight, keep the tires underneath you and wait for that white flag to fly to close the deal."

Hebert paired up this season with teammate Jeff Allgayer of El Campo, Texas, in moving up from the modified division, where he'd logged hundreds of highway miles on the United States Modified Touring Series. Late Model events closer to home began to look more attractive to Allgayer and Hebert.

"We figured going 300 to 500 miles down the road, traveling for $2,000-to-win for the modifieds' purse, the fuel we would save for the toter, to just start coming up the road 150 miles — it made sense," Hebert said. "We would spend more on tires for the Late Model, but the traveling money that we saved going up and down the road, we would still come out ahead versus the modified.

"We still run the modified and will continue to do so with the bigger shows, like with the USMTS, but now will stay more locally with the Late Model now. We missed the first two (SUPR) races at Texas Motor Speedway and at (Jones Motor Speedway in Chatham, La.), and Chatham was a double-points race, so we want to get with the series to learn more about how their Rookie of the Year works. It is our plan to run for Rookie of the Year in the series, but we will see how everything pans out, so far it is going pretty good."

Hebert is grateful for his connection with Allgayer — Hebert's teammate failed to make the feature lineup — in spearheading the move to the Late Model division.

"We kind of put this deal together when we went to the IMIS show in Indy in December, and he was all for it," Hebert said. "We went ahead and got some Pierce Race Cars from Bob Pierce ... and it took off from there. Without him, I would not be here with this Late Model right now, no doubt about that."

Whiteaker stayed with Hebert through the race's middle stages, but a broken right rear brake rotor ended his run and gave Hebert some breathing room. Late in the race, Hebert checked out and cruised to a four-second advantage on his way to becoming the sixth first-time series' winner since the beginning of the 2001 season. He joins Will Vaught, Bagley, Gary Christian, Culp and Robinson.

Hebert — driving a car powered by a Mullins Race Engine and sponsored by DAM Services, Allgayer Inc, Express Trucking, Showtime Signs and Specialty Automotive — was glad his experience behind the wheel of a modified came into play.

"This was my first time in a Late Model and I just attributed everything you have to do in a modified for 50 laps to this, because when the track is really, really slick, you had to keep it straight and the tires under you," he said. "I think all of that came into play for us tonight. I don't know how it all worked out."

"We would spend more on tires for the Late Model, but the traveling money that we saved going up and down the road, we would still come out ahead versus the modified."