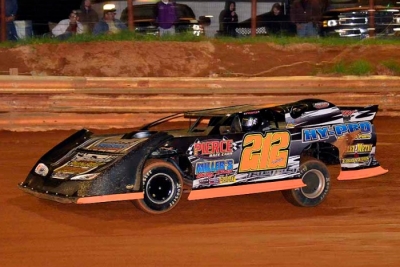 BLUE RIDGE, Ga. (April 7) — Josh Putnam led all the way Saturday at Sugar Creek Raceway for a $3,000 victory in the first Southern Regional Racing Series at the track.

Runner-up Ronnie Johnson of Chattanooga, Tenn., made a couple of challenges on restarts, but Putnam built comfortable leads and took the checkers a straightaway ahead. Cale Finley of Ardmore, Ala., Randy Todd of Lexington, Tenn., and hometown driver Shane Tankersley rounded out the top five. | Slideshow

Casey Barrow of Savannah, Ga., held second early in the race, but he struggled to keep control and ending up spinning in turn four about halfway through, causing a scramble among several cars including Finley and Todd. Johnson barely scraped through to inherit the second spot for the next restart.

Only about a half-dozen of 17 starters were running at the finish on a night when rough track conditions provided challenges for SRRS competitors, who raced at a track that ran its first event since 2009.

Notes: Putnam's Pierce Race Car is sponsored by Hy-Pro, Valley Metal and Miller's Body Shop. ... Cale Finley and Randy Todd also fielded Pierce Cars out of Putnam's shop. ... Besides Finley and Todd, Rodney Weeks, Jeremy Ledford, Bo Eaton and Devin Dilbeck were caught up when Casey Barrow spun in turn four. ... The track took several hours trying to roll in a wet racing surface that turned rough when racing action started. ... Riley Hickman won his heat race, but suffered radiator damage and other problems because of the rough track. He started the feature in a borrowed car, hit the wall on the second lap of the feature and was done for the night. ... SRRS drivers take a break before returning to Georgia for a May 4-5 weekend at Boyd's Speedway in Ringgold, Ga., and North Georgia Speedway in Chatsworth.