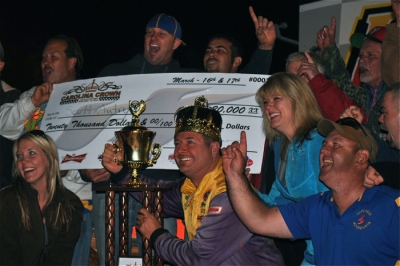 LANCASTER, S.C. (April 7) — Prior to the start of Saturday night’s Carolina Crown main event, Scott Autry would have likely been considered at best a long shot to win the inaugural $20,000-to-win race at Lancaster Speedway.

Starting 22nd in a stout 23-car field, Autry himself even doubted his chances at winning the 75-lap feature and considered just making a few laps to collect the $1,000 starting money to save his race car from the half-mile oval’s rough-and-tumble surface. | Autry wins Carolina Crown

But while Autry doubted himself, there was at least one person who believed in him. Giving his driver a boost of confidence before the start of the race, car owner Lyndon McLellan encouraged Autry to give it his best shot and try to make it to the front.

“Having mechanical problems in qualifying the other week, I really just wanted to go out there and make a few laps and collect that (start) money and take care for the car,” said Autry, who failed to record a qualifying time during time trials on March 16 for the rain-postponed event. “I really didn’t think we had much a shot, but Lyndon told me ‘I’d rather you not pull in cause I’d like to have that $20,000 and I think we can get it.’”

Turns out McLellan’s faith in his driver was well-founded.

In true David vs. Goliath fashion, the previously unheralded Autry charged through the field and outdueled Lucas Oil Late Model Series regular Jared Landers of Batesville, Ark., in the race’s closing laps to score the biggest victory of his career and reward his car owner with a handsome payday.

McLellan’s faith in his driver isn’t surprising considering how long he’s supported the Late Model veteran. He first joined Autry’s race team as a sponsor more than a decade ago while Autry was competing full time on the Carolina Clash Series.

He’s remained loyal to Autry as he’s entered the latter stages of his career, stepping up his support even as Autry went winless on the Clash tour from 2003 until August of last season.

“I really just can’t say enough about Lyndon McLellan,” Autry said. “He’s been with me for a long time and really been loyal to me. Me and my crew chief Rodney tried to fund our own deal for the first couple years I raced (Late Models). We were broke and he stepped up and said ‘if y’all keep the cars up and keep them at your shop, I’ll make sure you have a good race car.’ He’s been loyal to that for almost 13 years now.”

McLellan has especially fulfilled his promise to Autry this season, providing him with what Autry believes is the best race car he’s ever had. With a Randy Clary Racing Engine in his Wolf-Pack Racing-produced Rocket Chassis, Autry is hopeful more major wins will come before he calls it a career.

“Randy Clary and Wolf-Pack, they’ve gave me a package right now that if we can just fine tune it when we get to the racetrack, we’ve got a great race car right now,” Autry said. “Maybe we can get another one or two of these big wins before I get out of my racing career.”

While he’s optimistic about winning more races, Autry knows he’ll likely have a hard time matching his Carolina Crown triumph, either in money won or emotions felt following a victory that was special for many reasons.

“Winning a race this big, it’s special for me. But to be able to do it for the people who stand behind you for so long, that means a whole lot to me, too,” Autry said. “He knows he may not have the best talent as far as driver and crew, but he gives us the stuff that will win when we can all make it match up. It’s really special.”