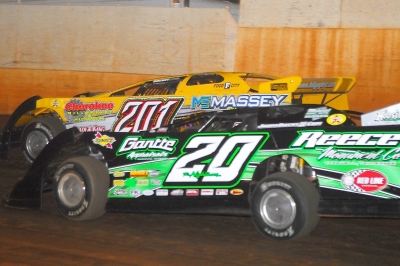 CLEVELAND, Tenn. (April 7) — The success of Jimmy Owens in recent season has created some lofty standards for the Newport, Tenn., driver, so when he entered April without a single checkered flag, it certainly seemed like a long dry spell.

The 40-year-old Owens ended that winless streak impressively Saturday at Cleveland Speedway, taking command early and cruising to a $10,000 victory, the 16th of his career on the Southern All Star Dirt Racing Series. | Video | Slideshow

"It's been a pretty rough season — a good season, but a rough season, and we finally got our first win of the year, and we're pretty tickled," Owens told a big crowd in victory lane after capturing Cleveland Speedway's postponed season opener.

"The track was really, really racy. In the heats, I was a little bit worried (because) it was a little one-laned on the bottom. But it smoothed up and I was able to move around and get by those guys ... It feels good to get the first (victory) of the season there."

The early stages of the 50-lapper looked as if it would be a tussle with most drivers fighting for real estate on the bottom and a handful of drivers looking to make the high side work for them.

McDowell shot out to the early lead, but the second-starting Ogle immediately started working the high side of the track, working into the lead on the third lap.

After Ogle's teammate, Tommy Kerr, drew a lap-four caution, Owens went to work on the high side, taking second from McDowell.

Owens then set his sights on Ogle. Owens and Ogle ran side-by-side for a number of laps before Owens finally grabbed the lead on the 12th circuit. Owens built a straightaway lead over Ogle by the halfway point, an advantage erased for Skip Arp's turn-three spin.

On the restart, Owens once again pulled away from the field. McDowell got back around Ogle for second. Ogle then found himself in a battle for Smith for the third spot while Owens was out front alone.

"We were too loose," McDowell said. "We were pretty good in the heat race, and we just didn't change enough to tighten up. So hat's off to Jimmy and those guys. He had the car to beat and we'll just take note and come back next time and try it again."

Ogle was strong early on the high side but couldn't hold off Owens, who made the winning pass exiting turn four.

"I started running the top and I could feel it coming on, and I got the lead there," Ogle said. "It just seemed like I started slipping a little bit after that. I just could touch the gas pedal like I was. I was having to really baby it and started pushing a little. But you know, I'm happy to get third. If you'd have asked me before the night started if I'd have taken a top-three, I sure would've."

Notes: Owens drives a Bloomquist Race Car sponsored by Reece Monument Company, Gantte Appraisals and Red Line Oil. ... The second heat took three attempts to get started, but not before some contact between Owens and Kerr on the second start caused some finger-pointing before the third start attempt. ... The Shamrock 50 was the first event staged under the promotorship of Ronnie Willkomm, who emerged to operate the track after bankruptcy was filed during the off-season. ... The next event for the Southern All-Stars is April 14 at Smoky Mountain Speedway in Maryville, Tenn.