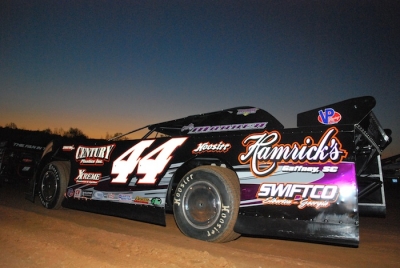 Chris Madden gets ready to hit the track in Lawndale, N.C. (Kyle Armstrong)

LAWNDALE, N.C. (April 6) – After a few near misses earlier in the season, Chris Madden of Gray Court, S.C., scored his first victory of the year Friday night at Cleveland County Speedway, picking up a $4,000 payday in Ultimate Super Late Model Series action on the 4/10-mile oval. | Video

The second-starting Madden grabbed the lead on the start of the 40-lapper and successfully navigated the track's rough racing surface in leading the entire distance over polesitter Steve Francis of Ashland, Ky. Dennis Franklin and Mike Gault, both of Gaffney, S.C., finished third and fourth respectively.

Madden, who finished second in the Ultimate tour's season-opening race the previous week at North Georgia Speedway in Chatsworth, Ga., ended a winless streak that dated back to Sept. 2 of last season when he won an Ultimate Series event at Wythe Raceway in Rural Retreat, Va.

"We've been working real hard this year. We've been behind a little bit, but we've been working our butts off the past month or two, just trying everything we can to make this thing run faster," Madden said of his Bloomquist Race Car. "We usually have a pretty good car through the rough stuff and overall tonight we had a great race car."

Francis closed in on Madden a number of times in lapped traffic, but never made a strong enough run to complete the pass. He settled for the runner-up spot after a late caution slowed his best run at Madden in traffic.

"I didn't need that caution. HIs car was a little better than us; the only way were were gonna get him was through lapped traffic," said Francis, the driver of the Barry Wright Race Cars house car. "Our car didn't like the holes quite as well his. He could go through them and turn a little better. But second ain't bad. … We made a little bit of money and got to test a little bit."

Franklin, the reigning champion on the Ultimate tour's rival Carolina Clash Super Late Model Series, rallied from a mid-pack starting spot and survived a deflating tire late in the race to earn the third-place finish.

"To start where we started, I'm tickled to death," Franklin said of the run in his AES Racing Barry Wright. "We've got a flat tire sitting there right now so just to finish the race I'm ticked to death."

Notes: Madden's Bloomquist car is powered by a Cornett Racing Engine with sponsorship from Baird Transport, Century Plastics, Hamrick's of Gaffney, Extreme Custom and Cycles, Elite Concrete and KC Transport. … With his fifth career Ultimate Series victory, Madden broke a tie with Jonathan Davenport of Blairsville, Ga., at the top of the second-year tour's all-time win list. … The race was originally scheduled to be the tour's season opener on March 24 but was postponed by rain. … Among the race's cautions were a flat left-rear tire for Casey Barrows of Savannah, Ga., suspension issues for Luke Roffers of Concord, N.C., and a broken driveshaft for Casey Roberts of Toccoa, Ga. Both Roffers and Roberts were running third at the time of their departures. … The Ultimate Series returns to action April 28 with a $4,000-to-win event at 311 Motor Speedway in Madison, N.C.