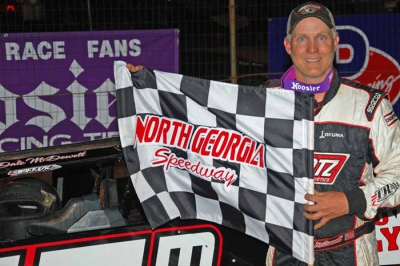 CHATSWORTH, Ga. (March 31) — In a race where late afternoon rain pushed race back deep into the wee hours, North Georgia Speedway veteran Dale McDowell of nearby Chickamauga, Ga., raced to a $4,000 victory in the season opener on the Ultimate Super Late Model Series. | Slideshow

Polesitter Chris Madden of Gray Court, S.C., jumped into lead at the outset, but as he tried to put a lap on Zack Mitchell, the third-starting McDowell made the winning move on the 16th lap inside turn four to take command. He led the rest of the way for his first series victory.

"The rain came in and the racetrack was totally different," McDowell said in victory lane. "There at the beginning we tried it on the high side, and it really, you could run up there for a couple of laps. Then after that you had to get back down, and Chris actually moved up there and was just trying to carry momentum and I was able to capitalize on him moving up.

"Lapped traffic as a beast there, but you'll have that. My hat's off to everybody at North Georgia Speedway and you race fans for sticking it out in the rain and coming to support us."

The handling on Madden's car prevented him from keep McDowell in check as they battled up front.

"We had a good car to start with, it just got tighter and tighter," said the runner-up. "I couldn't turn up here in (turns) three and four at all, and Dale, he could turn and get off the bottom a little better than I could. I'd push out coming off the corner. But all in all we had a good finish."

Casey Roberts of Toccoa, Ga., tried to take second from Madden on the final lap, but he ended up slipping back to fourth behind Jason Hiett of Lincoln, Ala., who rallied from his 11th starting spot.

"We started that deal out and we just said we're going to kind of ride around in the bottom and let everybody mess up. We were fast, but it seemed like every time I got to somebody, they'd push up a little bit and I was able to get up under 'em," Hiett said. "Man, I didn't need that (late) caution. I'd caught those guys, and I knew they were probably a little bit quicker than I was. Madden, he was a little bit quicker, McDowell, he pretty much was gone. Definitely a good night."

Notes: McDowell’s Team Dillon Warrior Race Car is powered by a Earnhardt Childress Racing Engine with sponsorship from Ferris Commercial Mowers, Klotz Synthetic Lubricants, YouAreHollywood.com, Cometic Gasket, Xinergy and WTW Enterprises. ... McDowell won his second straight start; he won March 17 at Volunteer Speedway in Bulls Gap, Tenn. ... Just half the starting field was running at halfway. ... Seventh-starting Chris Ferguson broke into the top five after 15 laps or so, but a puff of smoke from the engine forced him to the infield. ... Among cautions was a lap-18 pileup that involved William Thomas, Billy Ogle Jr. and Daniel Baggerly. ... Among drivers failing to make the feature: Kayne Hickman, Shawn Chastain, Johnny Chastain, Shane Tankersley, George Mashburn, Jake Knowles, Tyler Millwood and Riley Hickman. ... Millwood got a flat tire in a tangle with Austin Dillon in the second consolation. ... A pileup in the third consolation ensued after a Billy Ogle Jr.-Josh Putnam collision. ... The previous night's Ultimate event at Boyd's Speedway in Ringgold, Ga., was rained out. ... Ultimate's next event is April 6 at Cleveland County Speedway in Lawndale, N.C., a $4,000-to-win makeup of a March 24 rainout.