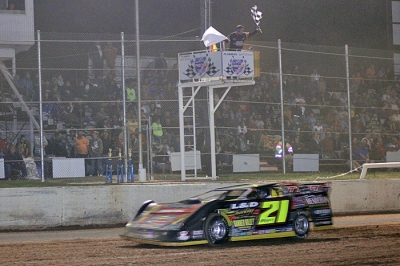 Billy Moyer takes the win a I-30 Speedway. (Best Photography)

After starting from the sixth position, Moyer Jr., also of Batesville, charged to second by lap five. He pulled within a few car lengths of his father a lap later as the leaders battled heavy traffic, but the elder Moyer pulled away during the remaining distance.

Moyer Jr. settled for the runner-up finish ahead of Morgan Bagley of Longview, Texas. Gary Christian of Broken Bow, Okla., was fourth with Jeff Chandler of Minden, La., rounding out the top five.

Eighth-place finisher Ross Camponovo of Clarksdale, Miss., was scheduled to start alongside Moyer on the front row, but elected to take a front-row challenge from track promoter Tracey Clay and move back three rows for the start of the race. Camponovo earned $500 for accepting the challenge and would have earned an extra $1,000 had he won the race.

Moyer didn’t accept the challenge, but wondered if he should have after dominating the race.

"We had a lot of experimental stuff on this car here tonight, and if I had known it was going to be this good, I just might have taken the challenge,” the winning Moyer said. “Either way it's been almost a decade since I've raced here, so it feels really good to pick up a win in front of the home-state fans.”

Notes: Moyer's Victory Circle Chassis has a Clements Racing Engine and sponsorship from L&D Trucking, Banner Valley Hauling, Red Line Oil, and New Vision Graphics. ... The one-two finish is the third in recent memory for the Moyers. They finished accomplished the same feat in consecutive Lucas Oil MLRA events Oct. 14 and 15 at West Plains Motor Speedway last season. The elder Moyer won both races. ... Moyer has six victories this season including three in Arizona in January and two in Florida in February. ... The Comp Cams tour takes a brief break before returning to action with an April 13-14 Arkansas doubleheader at Batesville Motor Speedway and Diamond Park Speedway.