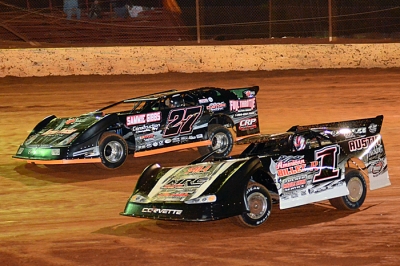 Proctor spun and received contact from Josh Putnam of Killen, Ala., on the initial start of the 40-lapper, but continued on to restart from the pole. Fifth-starting Riley Hickman of Ooltewah, Tenn., overtook Proctor early in the race, but a caution before a lap was complete negated the pass.

Proctor pulled away during a number of restarts throughout the remaining distance and held off a hard charge from 13th-starting Ronnie Johnson of Chattanooga, Tenn., at the finish. Johnson settled for the runner-up finish ahead of hometown driver Carnell Parker.

Putnam, the defending SRRS champion, finished fourth while Josh Henry of Newport, Tenn., advanced from the 15th starting position to round out the top five finishers. Coming off a runner-up finish in the tour's season opener the previous week, Hickman appeared to be headed for another strong finish until suffering a flat tire midway through the race. He ended up 13th in the final rundown.

Notes: Protor's Warrior Race Car is powered by a Custom Race Engine and is sponsored by Karen Proctor Electric, Sammie Gibbs Construction and S&P Construction. ... Proctor’s previous SRRS victory came on April 23 at Thunderhill Raceway in Summertown, Tenn. ... Daniel Miller of Shelbyville, Tenn., ran among the top five early, but fell out of the race with mechanical troubles. ... The tour’s next event is Sugar Creek Raceway in Blue Ridge, Ga., on April 7 and also pays $3,000 to the winner.