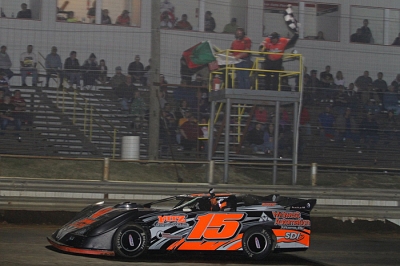 STERLINGTON, La. (March 23) — Larry Campbell of Van Buren, Ark., got the jump on a fresh crop of rookies and everyone else on the Comp Cams Super Dirt Series by dominating Friday's series opener at USA Speedway. The pole-starting Campbell edged Rob Litton of Alexandria, La., by two lengths in the 35-lap feature to earn $2,000. | Slideshow

Campbell, a three-time winner in Limited Late Models with the Race Brothers Show-Me Racin' Series, stuck with the low groove in racing to victory despite some brake problems late in the race.

"I saw it was getting rubber on the bottom. I knew when I watched the (consolation races) that the guys winning those races, were slowing down getting into the corners. In my heat race, I got lucky and was on the outside, catching a good groove to get around (Dewaine) Hottinger," Campbell said. "I thought to myself, 'I better stick to the bottom', because it was getting drier out there. We put a little bit more gear in the car and just tried to hit our marks every lap, it all worked out for us in the end."

Litton, who started outside the front row and was gunning for his second straight victory in Louisiana, stuck with the leader but couldn't overtake him.

"It was a one-lane race and we were just second in line. He did a good job staying on the bottom and that's where you had to be," Litton said. "It wasn't any stepping out and trying to go around him on the outside, so he did what he had to do. I didn't want to take us both out, second place pays better than finishing 15th.

"If I would have known earlier that (Jon) Mitchell was a distant third, I would have have probably tried stepping out to challenge for the win, it was just the unknown at the time that we chose not to do it," Litton said.

Campbell jumped into the lead over Litton, Mitchell, Robert Baker of Bryant, Ark., and Culp at the outset, but a turn-one incident involving Dewaine Hottinger, Chris Holley, Travis Ashley and Morgan Bagley quickly slowed the action. After another quick yellow for a single-car spin, Campbell took control while Litton kept him in sight, tightening the gap on lap 13 as lapped traffic came into play.

Just past the midway point, the Campbell-Litton battle had checked out from the rest of the field with Litton showing Campbell his car's nose on lap 22. Mullins took fifth from Baker on lap 27.

As the frontrunners faced heavy traffic late in the race, Litton bumped Campbell with two laps remaining as the leader earned a little breathing room on the straightaways and held his line in the corners.

"With about six laps to go, I realized I had an issue with my brakes," Campbell said. "I would go into the corner and they felt pretty soft. In the next corner, they felt really, really soft, so I just started pumping the brakes down the straightaway to maintain enough pedal to get me through the end. I knew we had some close racing behind me.

"I went down there to talk to (Litton) after the race. He was hitting me going into the corner and I said to him 'I'm sorry that you could have ran over me at any time, I felt you back there.' And he (Litton) replied, 'I wasn't going to take us both out of the race, I was just trying to give you a little help!' I told him 'I didn't need any help, because I couldn't stop.' He's a good guy, great racer and raced us clean — just fun to race against, so I had to go meet him."