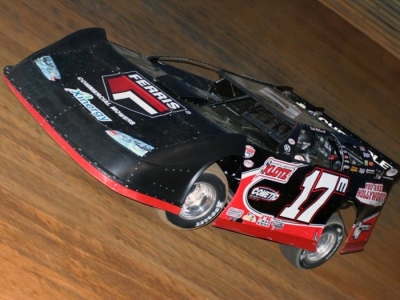 BULLS GAP, Tenn. (March 17) — He may not be following a national tour this season, but Dale McDowell has no intentions of taking it easy in 2012. The Chickamauga, Ga., driver made that point clear Saturday night at Volunteer Speedway, dominating the track’s unsanctioned Spring Thaw main event for a $10,000 payday at the 4/10-mile oval. | Video | Slideshow

“Hey, this is what it’s all about — having fun racing and getting the win,” said a smiling McDowell following his impressive performance that earned him his first victory of the season. “I’m not racing full-time with a series in 2012. It was just time to get away from the deal of traveling all over the country racing for points. We’re just going to go run races occasionally and when we show up, we’ll show up with intentions of running strong and winning.”

McDowell, the event’s fast qualifier, led the 22-car field to green for the 60-lap race with Scott Bloomquist of Mooresburg, Tenn., sharing the front row. McDowell grabbed the lead over five-time Volunteer track champion Vic Hill of Mosheim, Tenn., on the start with Bloomquist filing into third on the opening lap.

McDowell set a blistering pace around the high-banked track, quickly putting distance between himself and his closest challengers. While battles for position back through the field were taking place, out front McDowell opened a full straightaway advantage over Hill, Bloomquist and Ray Cook of Brasstown, N.C., at the race’s halfway point.

Defending Lucas Oil Late Model Dirt Series champion Jimmy Owens, who was relegated to a 13th-place starting position after getting into the first turn a little too fast on his qualifying lap and getting up against the outside guardrail, was steadily working his way forward. Owens of Newport, Tenn., moved around John Blankenship of Williamson, W.Va., for seventh on lap 31, and one lap later passed Billy Ogle Jr. of Knoxville, Tenn., to move into sixth in the running order.

McDowell was out front all alone for the double-file restart following the race’s lone caution on lap 34 with Hill and Bloomquist side-by-side behind the leader. Back under green, Owens wasted no time moving into the fifth spot with a pass of Vineyard racing off turn two.

But with a clear track ahead, out front McDowell was in a class all by himself as he once again began to pull away from Hill, Bloomquist, Cook and Owens. Racing off the second corner on lap 37, Owens got under Cook to move into fourth position.

With 10 laps remaining and the cruise control set, there would be no denying McDowell his first-ever Spring Thaw victory as he outran Hill, Bloomquist, Owens and Cook for the $10,000 payday.

“We had a really good car tonight, probably the best car I’ve ever had over the many years I’ve ran the special events here at Volunteer Speedway,” McDowell said of his Team Dillon Racing Warrior Race Car. “With the high banking here at The Gap it’s such a momentum track, and you really want to get through and off the corners well.

“We’ve got a strong engine under the hood. We had the car really hooked up and had such good forward bite under acceleration getting up off the corners. I want to thank my brother Shane (McDowell) and the guys who work on these dirt cars back in the Team Dillon Racing shop. I also want to thank Mike Dillon and his sons Austin and Ty for giving me the opportunity to drive their cars.”