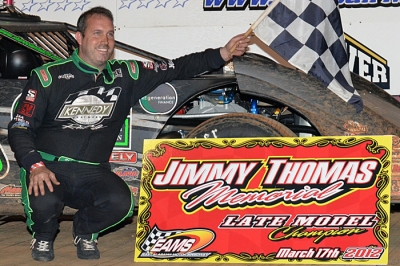 PHENIX CITY, Ala. (March 17) – World of Outlaws Late Model Series regular Shane Clanton made the most of an off weekend from his national-touring duties, picking up his first victory of the season Saturday night in the Jimmy Thomas Memorial at East Alabama Motor Speedway. | Slideshow

Clanton of Fayetteville, Ga., led the final 23 laps of the Southern Regional Racing Series season opener at the 3/8-mile oval, but claiming the $3,000 victory was far from easy for the national touring star.

After being involved in two cautions before a lap was completed, the fourth-starting Clanton recovered to make a dramatic three-wide pass on hometown driver William Thomas and race-long leader Brian Reese of Sharpsburg, Ga., on lap 17 of the 40-lapper and later held off a hard charge from 16th-starting Riley Hickman of Chattanooga, Tenn., on his way to claiming his second-career SRRS triumph.

The race took four attempts to get started with the eventual winner involved in two of the cautions. Clanton slid off the top of turn two on the second attempted start and tangled with the second-starting Thomas on the third. But Clanton survived both incidents and was able to keep his fourth starting spot thanks to complete restarts that reset the field in its original order.

Clanton went on to claim the victory over Hickman with Thomas third at the finish. Reese faded to fourth while Defending series champion Josh Putnam of Florence, Ala., finished fifth.

“This is our first win this year, but I was worried when we got in that skirmish on the first lap,” Clanton said. “After the contact I was worried a wheel plate would come flying off or we’d cut a tire down. That’s part of it though, I guess.”

Caution waved over the third start when Clanton attempted to split Thomas and Reese to move into the second position. Contact between Thomas and Clanton ended with both drivers facing the wrong way in front of the field exiting turn two.

“William slipped up and I filled the hole,” Clanton said of the tangle. “I guess Reese didn’t see me and come up into us. I lifted but it was too late and we hit.”

Everyone avoided the cars and Clanton pulled away with minimal damage. Thomas was not as lucky, receiving cosmetic damage to the right-rear corner of his race car.

“It was just a racing deal; I can understand that here because we carry so much momentum,” Thomas said. “We didn’t suffer too much damage and we were able to get back going but the car just wasn’t good enough for us.”

The caution for Clanton and Thomas was the last of the race as the event ran caution free once the field fired for the fourth start. During the caution, however, Smith was forced to give up his pole starting position and retired from the race with engine problems. Reese inherited the spot and jumped out to lead the early portion of the race.

By lap 15 Reese ran into slower traffic, allowing Thomas and Clanton to catch up. Two laps later Thomas looked under Reese for the lead but was beat to point by Clanton, who dove under both drivers entering turn one.

There was plenty of contact between the three drivers, but Clanton came out on top as all three continued running.

“Reese and Thomas got together and I drove under them,” Clanton said. “Thomas turned down and we got together.”

Though he knew he missed a good opportunity to take the lead, Thomas was satisfied with a third place finish.

“We went down the straightaway three wide and I just didn’t have nowhere to go,” Thomas said. “I hit Reese and come down just a little bit and Clanton was right there, but we come home with a good finish and don’t have much torn up.”

Clanton led unchallenged much of the remainder of the race until Hickman moved into the second position and began to reel him in. Hickman looked under Clanton off of turn two with six laps remaining but couldn’t make the pass down the back straightaway. Clanton felt the pressure and picked up his pace denying Hickman another chance at making a pass.

“I just showed him my nose to early and he moved down because he knew I was there,” said Hickman, who pulled alongside Clanton as soon as he reached him. “He wasn’t wanting to give up and made me work harder but our stuff was starting to go away. I thought we had a shot, but running second is great.”

Notes: Clanton’s Capital Race Car is powered by a Clements Racing Engine with sponsorship from Core Construction, b3 Architecture and Planning, IronCo Enterprises, Urban Energy Solutions and Signature Paving and Sealcoating. ... The victory is Clanton’s first since moving to Kennedy Motorsports over the offseason. It’s also his first on the SRRS tour since an 2008 win at Boyd’s Speedway in Ringgold, Ga. ... Round two of the Southern Regional Racing Series will be at Clarksville (Tenn.) Speedway in next Saturday and will also pay $3,000 to the winner.