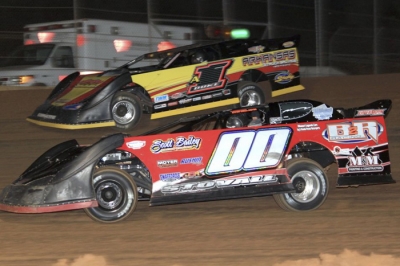 Seventh-starting Bub McCool of Vicksburg, Miss., finished second at the quarter-mile oval in one of Louisiana's biggest dirt races of the year. Chris Wall of Holden, La., making his debut for Childress Motorsports, finished third followed by Texans Morgan Bagley of Longview and Jon Mitchell of Texarkana.

Stovall took command in the early stages, saw his lead dwindle in the second half of the race, then pulled away again amid traffic en route to the victory.

Whiseant, of Texarkana, Ark., and Moore, of Haughton, La., weren't around at the finish. Moore and Moyer Jr. were involved in an incident on a lap-37 restart shortly after Moyer took the third spot from Moore. They both retired.

Among other incidents among five cautions, 12th-starting Jon Kirby spun early and seventh-running Allen Murray broke before the midway point.

Notes: Stovall's Fred Bishop-owned Victory Circle Chassis has a Scott Bailey Racing Engine and sponsorship from B2R Racing, JSR Suspension, Quality Electric Motors and RCR Designs. ... The victory is Stovall's second of the season; he won March 3 at Clarksville (Tenn.) Speedway in a Al Humphrey-owned car. ... Stovall's previous trip to ArkLaTex came in a modified for the track's Doug Murphrey Memorial. ... Race sponsors Childress Rentals and P&W Sales put up a $15,000 front-row challenge if Duke Whiseant or Ray Moore if they would start on the tail, giving them a $5,000 bonus if they won. They declined, even when the offer was sweetened with an extra $1,000 on the spot, making the bonus $16,000 in all. ... The purse was boosted to $1,000-to-start from $800-to-start just before the race. ... Timothy Culp earned the P&W Sales Hard Charger honors with his 17th-to-eighth run. ... Several different drivers held the second spot at one time or another including Stovall, Duke Whiseant, Ray Moore, Chris Wall, Morgan Bagley and Bub McCool, who finished in the runner-up spot. ... Stacy Taylor won Saturday's consolation race. ... Lee Davis won the Childress Rentals Last Chance Race. Doug Ingalls crossed the line second but lost a transfer spot when he was black-flagged for spinning Troy Berdan in a battle for the spot. ... Ronny Adams had a transfer spot in the last-chance race but spun with one lap to go with an apparent broken tie rod. ... Trey Beene, who was forced to a backup car after engine problems in Friday's prelims, drew the 21st starting spot among non-qualifiers (for the second year in a row). ... Troy Berdan bid highest for the 22nd starting spot. ... ArkLaTex drew 127 race cars overall on Saturday, including 27 Late Models. ... The event is the only Late Model race of the season at ArkLaTex. The regular season, with modifieds as the top division, runs through Oct. 20.