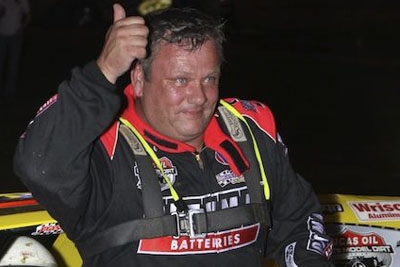 Don O'Neal gives his $5,000 victory a thumbs up at Florence. (Jeremey Rhoades)

UNION, Ky. (March 17) — Facing a rough and rugged racing surface Saturday at Florence Speedway, the half-dozen plugging away in the final laps were obviously racing conservatively, content to make it to the checkered flag of the season-opening Spring 50.

All of them, that is, except Don O'Neal. The MasterSbilt Race Cars house car driver appeared to be running nearly as hard as he was at the beginning, and the 47-year-old Martinsville, Ind., had good reason. | Slideshow

"It seemed like whenever I slowed down, the car would bounce around a lot more," O'Neal said. "When I ran hard it seemed to be a lot smoother."

O'Neal's strategy paid off with a $5,000 check and his fourth overall victory of the season as he dominated the final 36 laps in a war of attrition at half-mile northern Kentucky oval.

Five drivers were eliminated in a second-lap wreck on the backstretch, just nine were running at the halfway mark and only six finished as the high-speed surface that produced a track record for Eric Wells took its toll on the night's 33 competitors.

Even O'Neal struggled in his heat race, unable to get his yellow No. 71 rolling. But the team made changes for the 50-lap feature that gave him a winning race car.

"I could run through there and us not beat up the race car real bad," O'Neal said. "I knew on the first lap if I just bided my time, my car was going to be good."

Indeed, O'Neal started inside the second row and was running second when the lap-two collision between polesitter Justin Rattliff and Scott James exiting turn two triggerd a backstretch-blocking wreck.

After the cleanup, O'Neal restarted behind hometown driver and outside front-row starter Darrell Lanigan, stalking him through the early stages of the race while Lanigan fought steering problems.

O'Neal made the winning move on the backstretch of the 15th lap to take command, and when Lanigan dropped to the infield a lap later, the race was all but over. The winner built half-track advantages and cruised the rest of the way, lapping everyone except second- and third-place finishers R.J. Conley of Wheelersburg, Ohio, and 15-year-old Bobby Pierce of Oakwood, Ill.

Wayne Chinn of Bradford, Ohio, was fourth and Ryan VanderVeen of Six Lakes, Mich. — who missed time trials altogether because of ignition failure — rounded out the top five in his Florence debut. Tim Prince of Heltonville, Ind., was sixth.

Conley caught a piece of the second-lap accident, suffering damage to the nosepiece of his No. 71c Rocket Chassis. But he soldiered on, inheriting second place when Greg Johnson of Bedford, Ind., retired on lap 28 after breaking a right-front shock and losing power after mud packed into his car's crank trigger wires.

"I was trying to just stay straight and miss all the holes," said Conley, marveling at the winner's ability to handle the track conditions. "O'Neal can just bounce through that stuff and just go on."

The 10th-starting Pierce, competing at a track where his father won one of his biggest races and where his late grandfather had success, pulled alongside Conley a couple of times midway through before settling for third.

"I was wanting Conley really bad, but it was just every time I tried to pass him, I'd hit a couple of bumps and the car just pushed," Pierce said. "He pulled away from me, I caught back up to him, I had the chance again, but the same thing just kept happening."

Four cautions slowed the action. Besides the lap-two accident and Johnson's lap-28 departure, a lap-seven yellow appeared when Mike Meyers suffered damage in a turn-three accident at the same time Prince slowed with a flat left-rear tire. A lap-21 yellow flag appeared when Alan Vochaska, a South Haven, Mich., driver making his Florence debut, went up in smoke heading into turn one.

Notes: O'Neal's Jay Dickens-powered MasterSbilt is sponsored by Optima Batteries, Seubert Calf Ranches and Independence Lumber. ... O'Neal had off-season victories in Tucson, Ariz. (one) and East Bay Raceway Park near Tampa, Fla. (two) ... Eric Wells of Hazard, Ky., lowered the track record in qualifying with a 14.748-second lap. But while winning the first heat race to earn the pole for the feature, his engine threw the belts and overheated. Wells didn't have a backup car ready because he'd planned to sell it to Indiana driver Steve Casebolt (the sale fell through) and had removed the engine. Wells scratched for the night. ... Besides Scott James and Justin Rattliff, drivers involved in the backstretch skirmish on the second lap were Josh McGuire, R.J. Conley, Dustin Neat and Kent Robinson, who said he didn't mind the early exit after watching the attrition-plagued event. ... Fourth-finishing Wayne Chinn, who sat out most of last season off while launching 1 Shot Services Recycling Center, brought out an '09 Rayburn Race Car and has plans to run more frequently this season. "I've gotta get back in the swing of things now," said Chinn, who drove part time the past two seasons for Gary Engle Racing. "We might show up at a few more places than (fans) expect." ... Duane Chamberlain of Richmond, Ind., was in Engle's No. 15 at Florence, but he slammed the turn-four wall in his heat race and scratched for the night. ... Former track champion Jerry Rice of Verona, Ky., drove the James Hines-owned No. 24H, but scratched from the feature lineup after finishing fourth in a heat race. ... Darrell Lanigan sensed steering problems early and, after pulling out while running second, discovered the slave cylinder had broken off the steering rack, making it nearly impossible to turn the wheel. "You can't drive at all," he said. But Lanigan was confident he would've won. "It's just something that happened and it usually don't happen," he said. "It's nothing to put your head down tonight. We had the best car here tonight and should've won the race, but something happened." ... Jon Henry of Ada, Ohio, was running third when he pulled in with a severe vibration on the 18th lap. "I felt like the driveshaft and transmission and everything was about to blow out," said Henry, who made his 2012 with part-time crew chief Scott "Schoolboy" Smith in the pits. "It just started shaking so bad I couldn't even see straight." Henry was glad to run among the leaders. "We didn't have nothing for Lanigan or O'Neal, but we were probably as consistent, maybe we could've been a top-five car car I think. We've got a whole new crew here and everybody working together. Schoolboy's come on to help us out. I think we've made a lot of progress already. I can't wait to see what we can do when we get around home. Just the car ... once we all get comfortable and get on the same page, I think we're really going to start clicking. So I'm excited." .... Among other drivers failing to make the feature: Dustin Linville (he was racing with a foot broken earlier in the week when he dropped a 55-gallon drum of fuel on it), Tyler Carpenter (he briefly lost control in a heat race, bounding into the air and damaging his car), Rod Conley (he peeled a tire off the rim after starting on the pole of a heat race) and Justin Coulter (the Canadian rookie made early exit in his heat race). ... Florence drew a solid crowd on a beautiful evening with temperatures in the 70s, although approaching rain forced the track into hurry-up mode to get the Late Model and modified features completed. Joey Kramer of Hanover, Ind., won the mod feature. ... Florence hosts practice March 24 and returns to action March 31 with a $2,000-to-win event that opens weekly points.