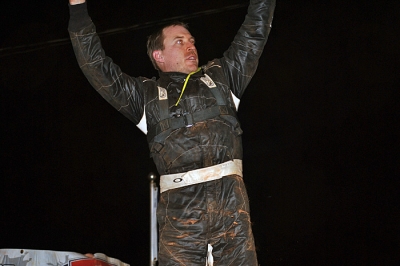 GASTONIA, N.C. (March 10) — Wisconsin transplant Luke Roffers may not originally be from North or South Carolina, but he’s lived in the Carolinas long enough to learn how important the Skyler Trull Memorial is to area drivers and the racing community.

That’s why Roffers, who has lived in Concord, N.C., for the past six years, was plenty excited Saturday night when he won the 12th running of the annual race that honors Skyler Trull, the young Clover, S.C., girl who died of leukemia in 2000. | Notebook | Slideshow

“This race is a big tradition here in the Carolinas and ever since I started racing down here I’ve learned it’s one all the drivers around here want to win,” Roffers said after holding off two-time race winner Chris Ferguson of nearby Mount Holly, N.C., to claim a $4,000 victory in the season opener for the Carolina Clash Super Late Model Series.

“Ever since I started coming here I’ve got to know (Trull’s father) Larry a little bit and know what the race is about,” Roffers said of the race that raises money for the Make-a-Wish Foundation. “It’s a sad deal, but it’s cool that they can keep her memory and have this race each year. That’s what makes it special for me to win it.”

After starting third in the 40-lap race, Roffers inherited the lead when an overheating engine forced outside polesitter Dennis Franklin of Gaffney, S.C., to the pit area during a lap-six caution. Roffers was able to pull away from the field through the first half of the race, but he struggled in lapped traffic during the closing laps while also fending off a resurgent Ferguson, who started from the pole, but faded after leading the race’s first two laps.

Ferguson pulled alongside Roffers during three consecutive trips through turns three and four from laps 31 through 33, but never got a strong enough run off the corner to complete the pass. Roffers enjoyed clear track after clearing the slower car of Travis Yow on lap 34, forcing Ferguson to settle for the runner-up finish. Kenny Compton Jr. of Bland, Va., was third with Johnny Pursley of Clover, S.C., and Jeff Smith of Dallas, N.C., rounding out the top five.

“I never did see him. I could hear him a little bit, but I wasn’t gonna let a lapped car wreck me,” Roffers said of his late battle with Ferguson. “It’s tough, but you just gotta try and be patient. It’s tough when you’ve got someone right behind ya. Sometimes you’re better off to be second in that situation, but we held on to it and got the trophy.”

Roffers knew his run to the front was made easier by Franklin’s early departure, but he wished he’d had the opportunity pass the two-time, defending Carolina Clash champion under green-flag conditions.

“I would’ve liked to have raced him for the win ‘cause I think me and him had pretty much equal cars,” Roffers said of Franklin, who easily pulled away from Ferguson after taking the point on lap three. “It’s hard to say if I could have got him, but either way it feels really good to come out first night and get this win.”

Ferguson, who was looking to become the race’s only three-time winner, was slow to settle in with his two-race old Warrior Race Car, allowing both Franklin and Roffers to move by in the early laps. He finally found his rhythm just after the halfway point, but by then it was too late to regain the lead on a track surface that became bottom-groove dominant as the race wore on.

“I felt like we had a better car in the long run, but with track like it was it’s all about track position and being out front,” said Ferguson, the event’s fast qualifier who donated the $500 fast time award to the Make-a-Wish Foundation. “I would’ve loved to win this one again cause it’s really a special race for me. But it’s our second race on the car and we ran second and sat on the pole, so I can’t complain.”

The seventh-starting Compton made a strong charge to move into the third position early in the race, and moved by Ferguson for second following a lap-six restart. But a nifty high-low crossover move by Ferguson in turns one and two on lap 14 put Compton back to third, where he settled in for the remainder of the race.

“We missed it a little bit tonight because we were trying some new stuff. (Chassis builder) Scott (Bloomquist) gave me some new stuff to try ... that wasn’t as good as we hoped,” said Compton, who was the runner-up in the tour’s final standings last year. “I did a little points racing after I fell back to third, not doing anything crazy. I was just kinda riding, looking out for the big picture.”