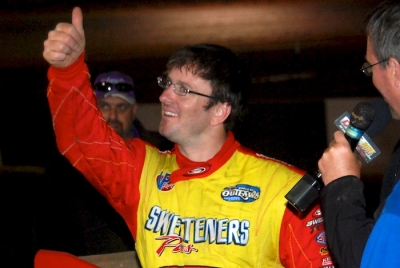 Tim McCreadie gives a thumbs-up after his flag-to-flag victory. (DirtonDirt.com)

GLENCOE, Ala. (March 4) — Tim McCreadie remembers his first visit to Green Valley Speedway eight years ago for the Bama Bash. The big-block modified convert from Watertown, N.Y., was still a little raw in his Dirt Late Model.

During time trials, most drivers used hard-compound tires and hugged the inside lane, but McCreadie, fresh off his first Late Model victory, bolted on soft rubber and hammered the highest groove, "like four lanes above the cushion" in qualifying second-quickest, McCreadie recalls, smiling at the memory. Veteran crew chief Gary Winger pulled McCreadie aside. | Video | Sidebar | Notebook | Slideshow

"Man, I don't know what's wrong with you, but you don't need to be doing that stuff down here," Winger told McCreadie. The New York driver replied: "I don't know no better because I'm so bad."

This time around, McCreadie's approach was a little more conventional in dominating the 75-lap main event. Starting outside the front row, the 37-year-old McCreadie led all the way for a $15,015 payday in the unsanctioned event, his richest victory in three seasons.

"We haven't had a night where it was comfortable like that" in a long time, said McCreadie, who edged away from polesitter Ray Cook early and led by a half-straightaway most of the race. "You never know where anybody's at, because this place here, you can't really see anybody anyways. You just try to be smooth and when you get to lapped traffic, try to get rid of 'em as quick as possible so you don't get passed.

"Once I saw (on the scoreboard) who was in the top three or four, and especially when (eighth-starting and fourth-finishing Ronnie) Johnson drove up there, I was a little worried that they might be moving around way more than I was. I don't know, it just happened to be our night."

McCreadie was quick to credit fellow driver Shane Clanton — and also Winger — for helping get his program in the right direction after struggles during Florida Speedweeks. The Georgians worked with McCreadie to help him get back on track in his new Warrior Race Car that carried him to a January victory in Tucson, Ariz., but zero top-five finishes at Speedweeks.

"As easy as it came in Arizona was as hard as it was in Florida," McCreadie said. "I know we've got a good piece and I know I've got great people behind, so taking time off and not racing wasn't going to fix what we had going on. We gotta race our way out of it."

McCreadie simply raced his way to the checkered flag in an event where the outcome was never in doubt. Mike Marlar of Winfield, Tenn., started third and took second from Cook on the 15th lap, but he never got within striking distance of McCreadie, even after restarts on laps 19, 39 and 62 following single-car slowdowns for Shan Smith, Doug King and Chuck Proctor.

"We had a good car," said Marlar, who drove a Bryson Motorsports Rocket Chassis that his team prepared in three days. "(McCreadie) was just spot on the money, and we were about 95 percent probably, I guess. He was just a little better — and out front."

Cook, who dropped back as far as fourth before recovering to finish third, knew he'd have his hands full with McCreadie.

"He definitely had the better car, and the top was really the good place to start, too. It's always been that way here, but it felt like as good as the bottom was, we might have a better shot tonight," said Cook, the Brasstown, N.C., driver who won the Bama Bash in 2009 and '10. "Early on, if I'd have guessed right on the lapped car when I was running second, I might could've got McCreadie because they bottled him up one time there pretty hard in the middle of (turns) three and four. But I was following him, so I was in the same shape he was. I was afraid somebody running third might pass both of us."

But nobody was passing McCreadie on this evening at Green Valley, where he ends a month-long stretch on the road by outrunning Marlar, Cook, Johnson of Chattanooga, Tenn., and Clint Smith of Senoia, Ga., who survived a race-long oil leak to finish fifth.

"It's a good way to go home, that's for sure," McCreadie said.

Notes: McCreadie's Warrior Race Car has a Pro Power engine and sponsorship from Sweeteners Plus and Integra Shocks. ... The victory was his richest since winning $20,000 on Aug. 20, 2009, in Lucas Oil Series action at Volunteer Speedway in Bulls Gap, Tenn. ... The event has average more than 40 Super Late Models in recent seasons, but didn't crack the 30-car mark. Ray Cook said third place was still good in a solid field. "I know the car count ain't as much as everybody thinks, but the quality ain't went down a bit," he said. "If there's 30 here, there's 25 that's serious about it." ...ï¿½ Fourth-finishing Ronnie Johnson missed the afternoon autograph session while swapping fuel pumps on his car after he discovered the first one was leaking. ... Thirteen of 24 starters were running at the finish of a race that started about 8:10 p.m. The start was delayed because drivers requested a chance to warm up their powerplants after a pre-race fireworks display. ... Kennie Compton Jr. of Bland, Va., won the Limited Late Model (sportsman) feature while Michael Page of Douglasville, Ga., won the Crate Late Model feature. Both paid $2,105-to-win. ... The sportsman division entrants were allowed to run with roofs and with a modest sideboard on the left-rear corner, giving them a chance at a $300 bonus. ... Green Valley announced that Junk Monkey Racing would be title sponsor for the $10,000-to-win Crate Nationals on April 5-7, the track's next event.