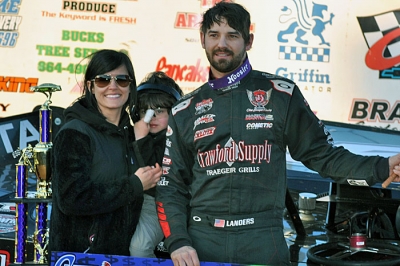 GAFFNEY, S.C. (March 4) — After struggling to adjust to his new Barry Wright Race Car during February’s Georgia-Florida Speedweeks, Jared Landers worried he might be in for a long season full of more struggles while attempting to tailor his driving style to fit his new ride. | Slideshow | Video

However, Landers’ outlook on the season is much brighter after Sunday’s March Madness X feature at Cherokee Speedway, where the Batesville, Ark., driver rebounded from his disappointing start to the season by dominating the unsanctioned 75-lap event for a $15,000 victory.

“I thought I was gonna be out to lunch all year, but to step out and win the first race after Florida, we really needed that,” said Landers, whose Clint Bowyer Racing team switched to Barry Wright cars from Rocket Chassis over the offseason. “Getting to know the race car is all we’ve been lacking. I think we figured out some things here and we’ve got a lot to build on with this car. This won’t be the last one we win.”

The second-starting Landers got the jump on polesitter Donald Bradsher of Burlington, N.C., on the start of the afternoon race and dominated the entire distance on a track surface that made passing difficult. Barry Wright house car driver Steve Francis of Ashland, Ky., finished second, making it a one-two finish for cars built by legendary chassis builder Barry Wright of nearby Cowpens, S.C.

Casey Roberts of Toccoa, Ga., settled for third at the finish after pressuring Francis for much of the race. Chris Madden of Gray Court, S.C., was fourth with Dale McDowell of Chickamauga, Ga., rounding out the top five in a race slowed by six cautions.

Getting to the lead on the start was key for Landers, who kept his race car in the track’s dominant middle groove en route to the third Super Late Model victory of his career.

“The start was the biggest part of it. Once we got out front it was pretty easy just to keep it in the black from there,” Landers said. “There wasn’t really much room to pass on. It was definitely a good race to be out front.”

Landers was securely out front from the get go, leaving the rest of the field to battle for second. Bradsher, who was seeking his first Super Late Model victory, trailed Landers through a 22-lap green-flag run to start the race, but let the fourth-starting Francis slip by on a restart. Francis never made much of a run at Landers, however, as he battled an ill-handling race car that lost brakes early in the race.

“From about lap 15 on we had no brakes,” said Francis, who in contrast to Landers, started the year strong with three victories during Speedweeks after teaming up with Wright over the offseason. “We couldn’t run with Jared anyway, but it would’ve been nice to have brakes so we could at least keep him honest. Still second’s not bad. That’s about all we could do with it. I don’t know what was going on with the brakes. One lap it’d have a pedal and the next lap it’d go to the floor.”

Roberts was happy with the third-place effort, but was disappointed he never had a shot to challenge Landers.

“I’d really like to have won this one. I felt like we had a good chance at it,” said Roberts, who drove a Capital Race Car in the event. “With daytime racing here you kinda know what to expect. It’s a little disappointing, but it’s a good run for us. We’re happy with our car and excited to go to the next race.”

Bradsher’s race came to an early end when contact with Jonathan Davenport of Blairsville, Ga., on a lap-28 restart sent both drivers spinning in front of the field. A seven-car pileup ensued, knocking Bradsher, Davenport and others out of the race.

The race’s only other major incident occurred on lap 48, when contact between Chris Ferguson of Mount Holly, N.C., and Johnny Pursley of Clover, S.C., sent Pursley into the wall on the back straightaway, knocking Pursley out of the race.

Notes: Landers’ Roush Yates-powered car is sponsored by Crawford Supply, Klotz Synethetic Lubricants, Mark Martin Chevrolet, Cometic Gaskets and Boater Sports. ... Landers’ previous victories came in the Comp Cams Topless 100 at Batesville Motor Speedway in 2010 and a Lucas Oil Late Model Dirt Series event at Tazewell (Tenn.) Speedway in 2011. All three of his victories were earned in different chassis. He was in a Warrior Race Car at Batesville and a Rocket at Tazewell. ... The race drew just 15 entries for Saturday's prelimenary action. Five drivers who didn't compete Saturday entered the race Sunday and started from the tail of the field. Among those was Scott Bloomquist, who drove Madden's backup car to an 11th-place finish. ... The race was Cherokee's season-opener. The 4/10-mile track won't host Super Late Models again until the Rock Gault Memorial on April 21. The $4,000-to-win race is the first race for the new Battle of the Eastern All-Stars Tour. ... David Smith of Inman, S.C., led all 20 laps of Sunday's Crate Late Model feature.