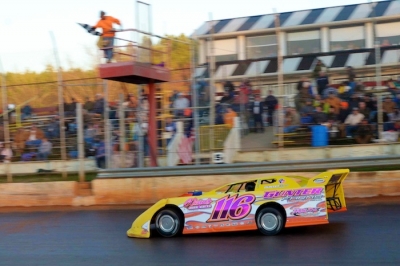 RINGGOLD, Ga. (Jan. 28) — Randy Weaver of Crossville, Tenn., didn't take long to get up to speed with his new Outlaw Race Parts team.

Setting fast time and starting on the pole Saturday afternoon at Boyd's Speedway, Weaver's No. 116 led all the way in the Cabin Fever 40 for a $3,000 victory over last year's race winner Ronnie Johnson of Chattanooga, Tenn. | Slideshow

Johnson pressured Weaver a few times amid traffic, and Weaver survived a scare when he was collected in a tangle with lapped cars, but he came out on top on a winter day that drew 46 Super Late Models to the third-mile oval on the Tennessee-Georgia border.

Johnson finished second ahead of Mike Weeks of Friendsville, Tenn., who was third in his debut with Kyle Motorsports. Jake Knowles of Tyrone, Ga., and 10th-starting William Thomas of Phenix City, Ala., rounded out the top five finishers.

Second-row starters Ray Cook of Brasstown, N.C., and Jason Welshan of Maryville, Tenn., weren't around at the finish. They tangled on the second lap with Cook's car suffering significant damage, and they were the first two drivers out of the unsanctioned event.

At the drop of the green in the 40-lapper, Weaver immediately jumped to the lead over Johnson, butï¿½ quick yellow flew for the Cook-Welshan tangle that swept up several other competitors, inflicting minor damage.

Weaver resumed his spot in the lead with Johnson closing in amid heavy traffic in the first half of the race. The leader met near-disaster on the 15th lap when the slower cars of Tod Hernandez and Chad Winkle spun in front of him.

Weaver was collected in the incident, coming to a stop against the wall in turn four. Officials, however, ruled Weaver didn't cause the incident, and he was reinstated to the lead with little damage to his yellow and orange race car.

Johnson continued to stalk Weaver whenever slower cars became an issue, but Weaver pulled out to a relatively comfortable margin with clear racetrack. With five yellows slowing the action, the leader founder plenty of opportunities to log laps with clear track ahead.

The final caution appeared for David Jackson's lap-31 crash, and Weaver cruised the rest of the way.