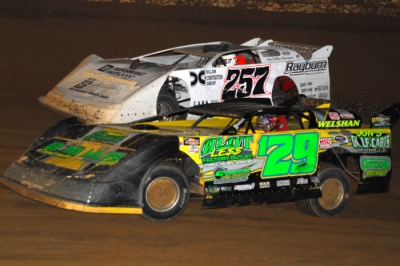 Jason Welshan has raced for 15 years, but 2011 marked the first season he's gone full-time racing. It was an unqualified success as the Maryville, Tenn., racer captured 29 feature victories in 53 starts through east Tennessee and other regional dirt tracks.

“Last year was my first year of actually trying to do this for a living and I did pretty decent at it,” Welshan said. “We had a very successful year, probably the best year I’d ever had.”

Driving for Tim and Angie Kyle in 2011, Welshan claimed the track championship in the Crate Late Model division at the Boyd’s Speedway in Ringgold, Ga., while also competing and winning at tracks from Virginia to Alabama.

“Bill Bunch is building our super motors,” Welshan said. “He also takes care of our crate stuff. He’s GM certified and he does an excellent job.”

When Welshan isn't racing for Kerr and Rolfe, he'll make occasional starts in a Trackstar chassis (built by Lester Weeks) that Welshan owns with his father.

Although Welshan was a successful traveler last season, Welshan says he has to carefully consider the economics of racing when he chooses which events he plans to enter.

“I look at the higher-paying races and try to pick and choose where I go,” he said. “Some people may call it cherry-picking, but if it’s a $3,000-to-win Crate race and (Hall of Fame driver) Ronnie Johnson is going to be there, I still go.

“I try to pick where the most money is going to be paid on any given weekend and go there. If it’s going to cost me another $125 in diesel fuel but I can make another $600 then that’s what I’m going to do.”

As a full-time racer, Welshan and his mostly volunteer crew dedicate at least eight hours each day toiling at his trade. While most of those hours are spent working on the cars, there is also a certain amount of time required for administrative duties such as accounting and bill-paying. To alleviate some of that workload, Welshan has an intern in sports management from the University of Tennessee working with his this year.

The 2012 season should be a busy one for Welshan with Boyd's opening up Saturday with its Cabin Fever 40, an event that includes a $3,000-to-win Super Late Model event along with a $1,200-to-win Crate Late Model event.

Welshan will likely compete at least two nights a week and see a variety of racetracks in his No. 29.

“This year I’m not going to get tied down to any local points deal,” Welshan said. “I’m just going to bounce around to different tracks from Alabama to Wythe (Raceway in Rural Retreat, Va.) to Gaffney (Cherokee Speedway in Gaffney, S.C.) and all in between.”

With his hobby now his primary business, Welshan will try to get back to the business of winning.