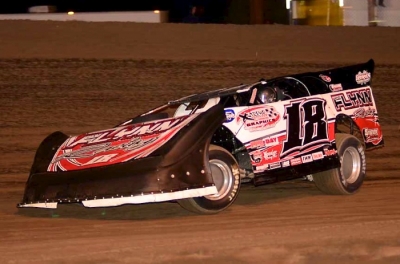 GREENVILLE, Miss. (Nov. 4) — Ronny Lee Hollingsworth has a new edge with his Flynn Motorsports team. The 26-year-old Northport, Ala., driver is enjoying the help of new crew chief Anthony Burroughs, a fellow Alabamian who has years of experience himself as a Dirt Late Model racer.

With Burroughs now turning the wrenches for Hollingsworth, the team is looking for some late-season success at the fifth annual Gumbo Nationals at Greenville Speedway. Hollingsworth is slated to start outside the front row in Saturday's 70-lap, $7,000-to-win main event at the quarter-mile oval after winning one of Friday's four heat races. | Gumbo Nationals prelims

"Me and Burroughs have been friends forever, and it definitely helps having somebody in there who's raced and drove, (so) when you get out, they can understand your perspective and help you out and kind of know what they're looking at," Hollingsworth said. "He's doing a great job. I'm pretty excited about that deal and I think it's only going to get better the more we work together."

Hollingsworth kept any pursuers at bay in his Greenville prelim despite fighting a tight-handling car and a car riding on tires with a harder compound than his opponents. But he's confident the No. 18, equipped with a spec-motor package, is capable of a victory on Saturday.

"We're in the race and it's (70) laps and we've got the right motor and right spoiler on there," Hollingsworth said, "and we've just gotta do our job tomorrow."

The initial start of the second heat race at the Gumbo Nationals had a bit of a scramble with Chad Thrash and Timothy Culp spinning before the field was reset. But all turned out well for the third-starting Culp, who grabbed a victory in the prelim.

"I know the door got bashed in a little bit," said the 21-year-old driver from West Monroe, La. "We got going there and started off pretty good, and kind of got away from 'em in that heat race."

"My car wasn't the best it could've been. We could've been a little better. We just got to the bottom and just kind of held our own."

In his first full season of Late Model competition, Culp is trying to carry over his success from the O'Reilly SUPR circuit, where he was a four-time winner and finished second in series points. He'd like to add a PRO Dirt Car Series victory at Greenville.

Jack Sullivan of Greenbrier flirted with trouble in the high groove at Greenville's gumbo clay oval during time trials before settling down for a victory in his heat race.

"I kind of screwed up timing in," Sullivan said. "It's pretty treacherous up there. I took a lap up there and it about scared me to death."

Starting sixth in his prelim, Sullivan quickly got to fourth and then picked his way to the front, taking the lead from upstart Kyle Pleasant with two laps remaining for a lead he'd never give up.

"Once the front tires where they got to steering a little better, it really took off there," said Sullivan, who pilots the GRT Race Cars house car. "Like I said, I've got the traction. We're just working on turning a little better here. I'm looking forward to the race. I think it'll be a good race. ... I know it's a (spec-engine) race, so it'll be kind of interesting to see who comes up through there and who don't."

Sullivan has been running steady in a new GRT piece in recent weeks, and he's confident he's got a chance in Saturday night's main event.

"We've kind of all went down a road there we thought we needed to go down, and sometimes you've gotta take a couple of steps back to go forward. Sometimes you can overthink this," Sullivan said. "So we've kind of went back and kind of just broke out some older stuff, kind of combined it with some of the new stuff we've been doing a little bit more. It seems to be working. We weren't bad at Whynot (Motorsports Park's Fall Classic), we fought a little electrical problem last week (at Magnolia Motor Speedway's Cotton Pickin' 100) and pulled off a little early.

"It's coming around. We're looking forward to it. We kind of wish the season would keep on going now."