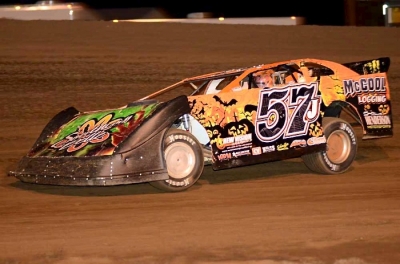 The fast-qualifying McCool, of Vicksburg, will start on the front row with Ronny Lee Hollingsworth of Northport, Ala., after both won heat races during Friday's prelims for the $7,000-to-win event scheduled for Saturday night on the Mississippi Delta. Timothy Culp of West Monroe, La., and Jack Sullivan of Greenbrier, Ark., also notched heat race victories and will start in the second and third rows of the Promoters Racing Organization Dirt Car Series event. | Notebook | Slideshow

In the first heat, McCool started up front with Neil Baggett and went on to lead every lap, fending off a mid-race charge from Chad Dupont to claim the win. McCool, Dupont, hometown driver Greg Fore and Baggett transferred to the feature.

In heat two,Chad Thrash and Bo Gordon were slated to start on the front row, but Gordon was unable to make the call after flipping on the second lap of his time trials. Culp charged from his third starting spot for the victory over Ross Camponovo, Mike Palasini Jr., and Josh Putnam while Thrash struggled to a sixth-place finish.

Hollingsworth battled B.J. Robinson much of the third heat before wrapping up the victory, while Robinson, eighth-starting Allen Tippen and Johnny Stokes transferred to the main event along with the winning Hollingsworth.

In the fourth and final heat, Sullivan completed a rally from his sixth starting spot by overtaking Kyle Pleasant with two laps remaining. Pleasant also transferred to the main event along with brothers Rick and Brian Rickman.

On the undercard in the Crate Late Model division, Stokes grabbed the pole for the 50-lap NeSmith Chevrolet Late Model Series-sanctioned division feature that pays $3,000 to the winner by virtue of his victory in the first heat. Other heat race winners filling spots in the first two rows of the Crate feature are Bubba Harrison, Duke Palasini and Ashley Newman.