Notes: Wrapup of Cotton Pickin' 100 at The Mag 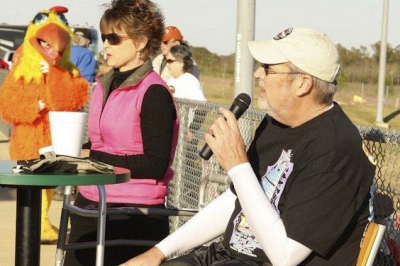 Injured announcer Ross Tingle was back in action at Magnolia. (foto-1.net)

COLUMBUS, Miss. (Oct. 29) — What a difference a day makes. Actually, what a difference a lap makes. Jason Cliburn was one lap away from solidifying a spot in the eighth annual Southern Belle Cotton Pickin' 100 during Friday night's preliminaries. Instead, Cliburn lost the spot on the white flag lap to Dane Dacus and was relegated to a last-chance race on Saturday. | Davenport wins Cotton Pickin' 100

That didn't work out so well. On the first lap of the first consolation race, Cliburn's car pushed hard getting into turn one. Cliburn got into to the wall, cutting his weekend short after a promising start. Cliburn was the second fastest qualifier in his 33-car group, and the fourth quickest among all qualifiers on Friday night, but despite that speed, he was done in by that last lap pass.

In a field of 66 Late Models, each and every spot is important, whether it be racing for the final transfer spot or for the next best thing — a chance to start on the front row of a consi.

The consolations proved to be some of Saturday's best action. With the track as fast as it had been all weekend, drivers were able to maneuver around the 3/8s-mile oval in an effort to race their way into the main event, which paid $1,000 to start.

Chase Washington, who had the overall fastest time during Friday's qualifying, Wendell Wallace and Eric Cooley were the only three drivers able to take advantage of their fourth-place finish in the heat race and turn around and advance to the feature.

Washington and Wallace started on the front row of the third consolation and were able to hold serve, while Cooley started on the pole of the second consy and was able to hang on for a second-place finish.

Cliburn, Rodney Wing and Rick Rickman — who each were just one spot away from transferring through their heat on Friday night, weren't able to take advantage of that valuable front row starting spot in the consi.

One driver who did make some noise was Ronny Lee Hollingsworth. The Northport, Ala., driver was a distant eighth in his heat and started ninth in the second consy. But his Flynn Motorsports ride looked like a completely different machine as he raced his way into the feature with a victory.

No driver came from a deeper starting spot in a consy to transfer to the feature than he did, and only Klint Byars, who qualified 20th in his group, had a slower qualifying time, yet both were able to make the 100-lapper.

Back in the booth

Anyone who has been to either of the tracks in Columbus or attended a race at Talladega (Ala.) Short Track has likely heard the voice of Ross Tingle booming from the public address system. Tingle is a veteran announcer who spent a lot of time behind the mic.

Tingle was badly injured when he was struck by a race car in the Columbus Speedway infield in August and has been away from the track. He spent several days in the hospital and has continued to undergo treatment.

"It broke the leg off; It was just holding on by skin," Tingle said. "The (doctor) had to build the leg back, graft skin."

Tingle returned to the booth this weekend at Magnolia, although getting up and down the steps in the press box was a challenge. Even so, he was glad to be back, using a walker to assist his left leg. And his familiarity with the drivers was welcomed by the fans.

Though he's doing much better, he's still not out of the woods just yet. "I go back Tuesday to see if they are going to put a real cast on it," Tingle said.

The lone caution in the Cotton Pickin' 100 turned out to be a killer for several drivers, not just then-leader Billy Moyer. While Moyer was leading the race and was partially responsible for the yellow flag when he and Clint Smith got together, drivers like Scott Bloomquist, who was tracking Moyer in the second, and Dennis Erb Jr., who was running fifth, suffered as well.

They were among the drivers, joining Moyer, who lost spots on the restart. "Obviously it was big because we were trying to take the lead," Bloomquist said.

It was clear that some cars were better than others after running 63 green-flag laps and then slowing for the caution. Bloomquist, however, suggested that there could be a bigger difference in the drivers' tires than just the number stamped on the side, who wondered if anyone's rubber was enhanced by chemical treatment that went undetected.

"If all they are doing is sniffing tires, then it's a waste of time," Bloomquist said of the track's detection device. "All these unsanctioned races, you just don't know about. It seems like with sanctioned races, things don't seem to happen as much."

Bloomquist has a history of questioning tires. He protested the rubber on Jimmy Mars' car after the World of Outlaws-sanctioned Firecracker 100 in Pennsylvania in June. The tests on Mars' tires came back negative.

Ironically, Davenport was tossed from competition in 2009 and 2010 during the Magnolia State 100 at Columbus Speedway — the track just across town — which is also promoted by Johnny Stokes. It was the sniffer that got Davenport those two times.

During the drivers' meeting. Stokes made it clear that if the sniffer detected anything, that driver was finished for the weekend.

There were 16 cars still on the track when that single caution waved on lap 63. While it helped eventual winner Jonathan Davenport, of Blairsville, Ga., regroup and claim $15,000, and it allowed fellow Georgian Shane Clanton to rally to a runner-up finish, there was yet another Georgia driver who took advantage as well.

Clint Smith of Senoia, Ga., was directly involved in the caution as he and race leader Billy Moyer made contact. Smith was the last driver on the lead lap and though he was racing hard to stay on the lead lap, he never wavered from his hub-hugging line lap after lap. It was the groove that Smith had used since the drop of the green, and like Moyer, he was committed to it.

When the two got together to bring out the caution, Smith lined back up where he was running because he was the last lead-lap car. When the race went green, he worked his way forward, passed four cars and finished sixth.

"It helped me," said Smith of the spin. "I knew when he hit me and spun me out that I had a chance to gain some spots."

Stokes, who promotes both Magnolia Motor Speedway and Columbus (Miss.) Speedway, is known in the south as Dr. Dirt for his knack of prepping racetracks. The former driver turned promoter turned part-time driver again is also pretty savvy at scheduling races as well.

The Cotton Pickin' 100 was originally scheduled for earlier in October, but after looking at the area calendar, Stokes opted to push the race back a few weeks. Why? College football was one the biggest factors.

Both the University of Alabama, which is less than an hour drive from Columbus, and Louisiana State University were off this weekend. And Mississippi State, which is just 25 miles to the west of Columbus, was on the road at Kentucky. All played a part in Stokes' decision to switch the event to Oct. 27-29.

"Yes, that's exactly the reason we moved it," said Stokes.

Anyone who has tried to find a hotel room in Columbus when MSU has a home game can certainly understand the decision.

"This is definitely better," Stokes said on the chilly night. "I just wish it was a little warmer."

Illinois native Kevin Weaver was piloting the Lee Thomason-owned Rayburn Race Car, but was listed on the sign-in sheet as Randy Weaver. For those thinking it a bit odd that Randy Weaver, of Crossville, Tenn., would be behind the wheel of a Rayburn, they were right.

It was indeed Kevin Weaver, who took Thomason up on the offer to head South and race, where the weather was only a bit warmer than it was in his native Illinois.

"He still wanted to race some, so here we are. Not sure what we're doing her in the South … especially in a Rayburn," joked the former UMP champion who has spent most of his career chauffeuring Rayburn Race Cars.

Weaver never really got on track and didn't make the main event.