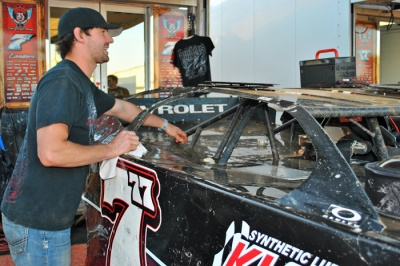 Jared Landers got some extra help in the pits at Whynot. (DirtonDirt.com)

MERIDIAN, Miss. (Oct. 22) — Jared Landers finally made the entire distance of a 100-lap race without any major issues. The 2011 Lucas Oil Late Model Dirt Series Rookie of the Year has been competitive in some of the sport’s biggest 100-lappers this year, but he has seemed to find some form of trouble late in each of those races.

It took a trip to Mississippi for Saturday night’s 17th annual Coors Light Fall Classic for Landers of Batesville, Ark., to finally put it all together in one of this year’s extra-distance events. | Davenport captures Fall Classic

“I felt like I really finished that one without any real troubles,” Landers said after his 14th-to-fourth run in the unsanctioned special that Jonathan Davenport of Blairsville, Ga., earned $15,000 for winning. “That’s something we’ve struggled with this year, so it feels great to finally finish one of these 100-lappers like this.”

For the improved performance, Landers credits a great Rocket Chassis that he didn’t have to “hustle around too hard.” And for that, he said a hired gun who served as crew chief for his Clint Bowyer Motorsports entry over the weekend made all the difference.

Landers enlisted the help of Rocket Chassis guru Randall Edwards, who normally serves as the head wrench for World of Outlaws Late Model Series regular Darrell Lanigan of Union, Ky. Landers said that having Edwards’s knowledge in his corner at Whynot helped him discover some things on his race car that made it much easier and smoother to drive, while still remaining competitive.

“I think (having Edwards) showed up there quite a bit,” Landers said. “I don’t think I’ve had a car that was that good since I’ve been racing a Late Model. This Rocket car, he knows his stuff ... and it definitely helped me tonight. I think he helped me find some stuff on the car I’ve been looking for all year.”

Whatever the adjustments Edwards made on Landers’s race car showed up for the 29-year-old racer in the main event. At times, he was the fastest car in race that saw five different drivers spend time at the front on a track that produced two- and three-wide racing throughout nearly the entire event.

At one point during the first half of the race, Landers’s strong race car combined with all the side-by-side position swapping up front, had him thinking he could make a move from 10th to the lead.

“I was sitting there in 10th thinking I could take the lead just because of the way everybody was swapping spots and running all over the place,” Landers said of the race that produced 12 lead changes. “There was so many lead swaps, and not just between first and second. There were guys moving from fifth to first in like one lap. It was probably the best race I’ve ever been up there and involved with. I just thought I had a chance to get on up there, but we just ran out of time I guess.”

Even though he did run out of laps, and had to settle for fourth, Landers was happy to make the entire 100-lap distance.

“Normally I’m the guy up there running all over the place trying to make something happen,” Landers said. “The car was so good tonight, I was just able to be smooth, run the bottom some and move up when I had to. I think having Randall here helping out had a lot to do with that.”

Landers, who says he’s looking for a new crew chief for the 2012 season, will now have to return his borrowed crew chief back to Lanigan for some late-season events. But he says he wouldn’t mind adding a crew chief of Edwards’s caliber to his team.

“I think tonight proved that having someone who really knows what they’re doing with these cars makes all the difference in the world,” Landers said. “It’d be nice if we could get someone like Randall to work with us. I know he’s got a good thing going with his current deal, but it was well worth it having him here tonight that’s for sure.”

Jack Sullivan was one of five different leaders in Saturday night’s Fall Classic main event. But time at the front didn’t equal a strong finish for the Greenbrier, Ark., driver. He took the lead on lap 40 of the 100-lapper and appeared to have a car capable of pulling away from the field. But his car was never the same after a lap-44 restart and he faded from that point.

He managed to stay with the leaders until a shuffle amid heavy traffic dropped him well out of contention. He eventually faded to 13th at the finish.

“We took off there and got the lead and I really don’t know what happened,” Sullivan said. “It was a racetrack, that’s for sure. It was multi-groove and there were guys racing all over the darn thing.

“Our car worked pretty good there around the bottom and we got to the lead. Then that lapped traffic there, I don’t know what I did. I guess I juked and should’ve jived and then I fell back.”

It was a disappointing finish for Sullivan, who said tire choice had a lot to do with the outcome.

“If it’d been the Fall 50 we’d been all right, but I messed up on tire selection and it didn’t work out,” Sullivan said. “It’s disappointing, but something to build on I guess.”

Klint Byars of Carrolton, Miss., was another driver who faded after leading laps in the main event. He led the race’s opening 10 laps, but faded to a ninth-place finish with suspension issues.

“The first four laps it was good and then all of sudden it was like a light switch went off,” Byars said of the performance of his Victory Circle Race Car. “I thought I had a flat there for a minute cause it kept raring up and vibrating. I don’t know I think a shock went bad or something, cause it was a handful after that.”

Byars was looking forward to the event at Whynot, a track where he won three special events on his way to the Mississippi State Championship Challenge Series championship in his rookie season on the tour. And after earning a front-row starting spot with his heat race victory in Friday’s prelims, a ninth-place finish wasn’t exactly the outcome that the 24-year-old driver was hoping for.

“It’s disappointing. I mean we still got a top-10 finish out of it, but when you start up front like that you wanna do a little better,” Byars said. “I was really looking forward to running this deal. I was really excited about our chances, so yeah, it’s a little disappointing.”

The Fall Classic is the second late-season event in his home state this year that Byars felt he had a shot at least a good finish in, only to fall out of contention with problems. He also started near the front of the Magnolia State 100 at Columbus (Miss.) Speedway in September, but brake problems sent him to the pits early.

He has next weekend’s $15,000-to-win Southern Belle Cotton Pickin’ 100 at Magnolia Motor Speedway in Columbus to turn the trend around.

“That’s two big races we’ve had down here that we’ve had some mechanical issues that took us out of what I felt like would have been at least top-five finishes,” Byars said. “We’ve had a great year, but when you have these big races like this at tracks you’re pretty good at, we just really wanted to get one of ‘em. We still got next week (at Magnolia), so maybe we can get a good run there.”

After his fifth-place finish in Saturday night’s main event, Mike Marlar had trouble explaining what happened to his Bryson Motorsports Rocket Chassis.

“We fired off there around lap 30 or 40 and took off and man, my car had never felt better,” said Marlar, who started from the pole and led multiple times until losing the lead for good to eventual winner Jonathan Davenport on lap 55. “Everything was just perfect. Then we had (a lap-51) caution and I start struggling and here come Erb and Davenport. I don’t know. That was just an odd race for us.”

Marlar’s own performance wasn’t the only odd thing about the race. The up-and-down runs of not only himself, but also drivers like Bub McCool and Jack Sullivan, who both led multiple times as well before fading, and the high amount of position swapping up front was something he’s not used to seeing.

“I probably never have seen a race like that before where we had some much going on up front,” Marlar said. “It was a weird, weird deal. I guess it had to have been a good race for the fans, cause there was a lot of passing going on out there for the lead.”