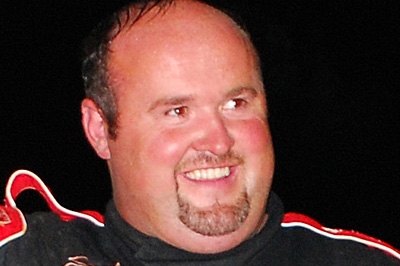 FAYETTEVILLE, N.C. — While Dennis "Rambo" Franklin of Gaffney, S.C., was happy to wrap up his second consecutive Carolina Clash Super Late Model Series championship on Saturday, he doesn't plan on a big celebration for a while yet.

"We’ve got a lot more racing to do this year," said Franklin, who clinched the title with his fourth-place finish at Fayetteville Motor Speedway. "We’ll celebrate it in January at the banquet." | Compton captures Carolina Clash finale

Series runner-up Kenny Compton did everything he could to catch Franklin, setting fast time and leading all 40 laps of the feature event. But Franklin overcame shock problems in qualifying to gain eight positions and secure the title by 35 points.

"Every year we start this deal saying we ain’t gonna run it, then we get tied up in them points and it’s hard not to run it," Franklin said. "We’re just tickled to death we won it on our own, that says a lot. The caliber of team I put together, my daddy and all these boys that help me, my hat’s off to them. I can’t do it by myself, they help me a lot."

Franklin also credited car builder Barry Wright, who he formerly drove for and still talks with virtually every day.

"He called me on the way down here and wished me luck, I wished him luck," Franklin said. "I went to him and told him we were going to rebuild these cars, and he didn’t have no problem whatsoever. (At) 311 (Motor Speedway on Oct. 8), I got in that wreck, really felt in my heart I could’ve won that race. When I got in that wreck, it put us behind, bent the spindle and all, come back up to fifth. And then tonight I dropped the ball on adjusting the shocks. You try to prepare so hard that you forget a lot of things."

Franklin will pick up a $10,000 check at the series banquet Jan. 28 at Charlotte Motor Speedway.

Kenny Compton Jr. of Bland, Va., ended his first full-time Carolina Clash season on a high note with his dominating victory at Fayetteville that gave him a runner-up finish on the tour's Countdown to the Cup championship.

"Second place is a good accomplishment for us," the 30-year-old driver said. "We’re new as a team. Asphalt guys that have never worked on dirt. The guy that’s working on tires, he’s learning, it’s his first year with us. All of us guys, it’s our first year together, and first time running the series."

With series points leader Dennis Franklin starting 12th in the main event, Compton had a shot at overtaking him for the championship, and he did all he could in leading every lap of the main event.

"I just tried to stay easy and just guide it into the corner, keep focused on it," Compton said. "I was trying to win and get this championship back and make up as much points as I could and Rambo snuck up in there."

Franklin's fourth-place finish clinched his second straight championship. Compton's not sure he'll take another run at the title next season.

"I really like the Clash," Compton said. "I’ve made a lot of good friends this year, had some good racing. Had a lot of hard times, but that wasn’t nobody’s fault, it was just bad luck. I really like the series and look forward to being back with them.

"If I don’t run the series points next year, I’ll run quite a bit of races with them. I really like them and I’d really love the series with them next year with them full time again. But I don’t want to make my boy (Trey) suffer. I enjoy running championships with him, too. He’s still young, and I’ve got to look out for him, too."

Runner-up Scott Autry of Fayetteville and Luke Roffers of Concord, N.C., had a tight battle for the second spot most of the race, with Autry squeezing past off the final corner to finish second.

The drivers traded some paint along with positions in the Carolina Clash finale after Autry said Roffers ran him too high on the racetrack on a double-file restart.

"You get in that loose stuff and you can’t throttle up," Autry said. "And when we were going through the turn I was thinking, ‘I know you ain’t going to do me like this,’ and he kept riding there, so I just turned left and put some doughnuts on each other’s cars. I really believe I hit a trigger there. It’ll be all right."

Autry admitted driving with revenge on his mind the rest of the way in his battle for the second spot as they futilely chased winner Kenny Compton Jr. while each made a few aggressive moves.

"I’ll go out there and race him clean next time," Autry said. "I’m hoping we can iron it out. I hope he thinks about it, and if he thinks he gave me enough clean track, I’d like for him to talk to me about it because I know where my right tires were and they weren’t going to take off."

Fayetteville driver Travis Yow wrapped up Rookie of the Year honors worth $2,500 with his 12th-place finish at Fayetteville; he was eighth in overall points. ... Twenty-seven drivers attended the series finale at Fayetteville, but J.C. Clary scratched. ... Timmy Carroll broke an engine in hot laps and was done for the night. ... Tim Allen broke a motor and piloted Craig Shuffield's backup car. ... Only three cautions slowed the last feature of the season.