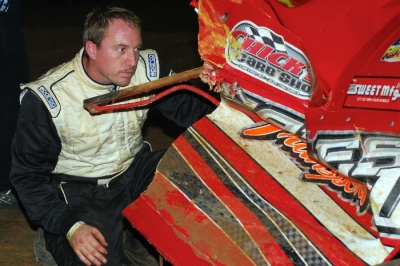 Luke Roffers checks out the damage to his car at Dublin Motor Speedway. (focusedonracing.com)

DUBLIN, N.C. — Luke Roffers of Concord, N.C., held the Carolina Clash Super Late Model Series points lead much of the season and was in the thick of the Countdown to the Cup chase heading into Saturday's third-to-last series event at Dublin Motor Speedway.

But a fifth-lap tangle with Kenny Compton Jr. of Bland, Va., knocked him out of the race and put a big dent in his hope for his first series championship. | Franklin wins at Dublin

On an early restart at Dublin, Compton slid into the driver's-side door of Roffers and forced him into the frontstretch guardrail. That triggered a multicar pileup and Roffers, a four-time winner this season who began the night only 23 points behind Compton for the series lead, finished 19th – and now 92 points behind Dennis Franklin, whose Dublin victory gave him the points lead.

Roffers declined comment on the crash, and while Compton shouldered the blame for the collision, he said the contact was simply hard racing.

“I really hate that. I hope he knows that I didn’t get into him on purpose,” said Compton, the winner of the May 21 Clash show at Dublin. “I got up on that inside berm, hit that hole coming out and drove out of that corner. I had the wheels turning left, and all he had to do was back out of the throttle a little bit. I could have gotten away from, he could have straightened up, we could have gone on and it wouldn’t have been no big deal.

“I hope he don’t hold no hard feelings on me because I like Luke as a competitor and as a person. He has a right to be upset. I just hate that it happened. I’ll apologize to him, maybe give him a week to cool down, tell him I’m sorry — that’s all I can do.”

Compton found himself in the middle of another tangle late in the Dublin feature as he chased winner Dennis Franklin along with Scott Autry of Fayetteville, N.C., and Mike Gault of Gaffney, S.C.

Instead of a third-place finish, Autry ended up sixth. “I’m sitting down here mad as can be,” said Autry, the Clash winner at Fayetteville last month, “and I ought to be happy that everything on the car can be fixed and I’m all right. It’s just disheartening to run as hard as you do and come up short, but that’s part of it.”

Said Compton: "I don’t know what the deal was with that. I came down through there and had the fella (King) passed, he was a couple of laps down, trying to stay with Rambo, had him cleared and the next thing I know I’m turned around. Didn’t know what happened. Talked to my guys, they said he just hauled off there into my left rear."

Two races remaining in the Countdown to the Cup with Dennis Franklin in the points lead in gunning for his second straight championship. He has an eight-point margin on Kenny Compton Jr. with two races remaining: Oct. 8 at 311 Motor Speedway in Madison, N.C., and Oct. 15 at Fayetteville (N.C.) Motor Speedway. ... Franklin's other series victory came at 311 on June 4. ... Only seven of 24 starters were running at the conclusion of the Dublin feature.