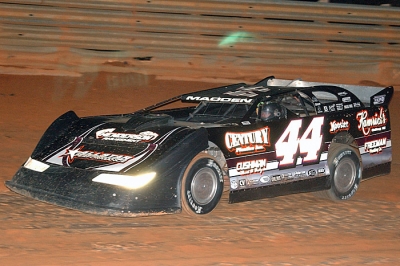 Madden, the 2007 and 2008 series champion who also won Thursday night’s series race at Cleveland (Tenn.) Speedway, was dominant the entire night. He posted the fastest lap during time trials and led flag-to-flag in the 53-lap main event on his way to recording his third series victory of the season and 17th of his career.

“The car was really good all night long,” Madden said. “It was a little tight a couple laps when I was moving around trying to find a smoother part of the racetrack to run and our race car got a little tight on me. But other than that we had a great race car. Probably the hardest 50 laps I’ve ran in a long time. This place was very demanding tonight.”

The victory virtually assures Madden of the championship heading into the final event Saturday night at Tazewell (Tenn.) Speedway.

“I guess we can race car hard tomorrow and not worry about points at all,” Madden said. “We really haven’t (worried), we’ve just been racing. We needed to win races ... maybe we can get this last one and make it all worthwhile.”

Eric Jacobsen of Seacliff Beach, Calif., and Ty Dillon of Welcome, N.C., battled it out for the runner-up position with the third-starting Jacobsen holding the position at the finish after fending off numerous low-side challenges by Dillon, who settled for third after starting from the seventh position.

Behind Jacobsen and Dillon, Stacey Boles of Claxton, Tenn., and Billy Ogle Jr., of Knoxville, Tenn., had their own battle for the fourth position with Boles holding off a heavy late-race charge by Ogle to claim the spot. Ogle settled for fifth.

Notes: Madden's Bloomquist Race Car is powered by a Cornett Racing Engine and sponsored by Century Plastics, Cushman Paint & Body and Hamrick's of Gaffney. ... Madden’s first victory on the tour this year came July 12 at Carolina Speedway in Gastonia, N.C. ... The victory is Madden’s third of the season at Volunteer, where also scored a $10,000 victory in March and a $5,000 victory May. ... The Schaeffer Oil Southern Nationals will visit Tazewell (Tenn.) Speedway Saturday night for the series finale. The event also pays $5,300 to the winner.