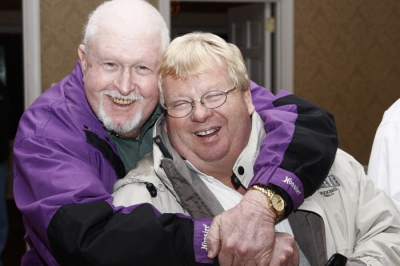 B.J. Parker, a racing pioneer and founder of the Southern All Stars Dirt Racing Series, died Monday night at his Graysville, Ala., home, leaving behind many friends he made throughout his career. Drivers, promoters and others associated with Parker shared memories and thoughts about the silver-haired gentleman:

Ronnie Johnson, Hall of Fame driver from Chattanooga, Tenn., who has won three Southern All Stars championships and a series-leading 62 victories:

"He had everybody's respect. He put a set of rules together so we could go to all these racetracks in the Southeast and everybody could take what they already had and race. He did everything with a smile on his face. I don't ever remember him having a harsh word for anybody, and it would be hard to find anybody who ever had anything negative to say about him." | Obituary

"He took a lot of us in the '80s and '90s and enabled us to get out of our backyard and get out and race at different places — and make decent money doing it. The list of drivers that started out with his series and have gone on to win national championships and crown jewel events is a pretty impressive list. I think that just speaks for itself as to how good the series is."

"The first year I got started in '05, the fifth or so race I put on me and B.J. promoted together at North Alabama Speedway with the track promoter Jeff Greer. I took that as a huge compliment in when he wanted to do a race with me. I had heard his name for years and years before I ever thought about putting on a race."

"Most of the racers always respected what (Parker) said, because they knew — they'd come to learn he was looking out for him. A lot of times racers don't totally agree with you right at the time, but after they sit and think about it a little bit, they understand it a little better."

"We were on the way to Speedweeks one year. ... and we were sitting in a restaurant down I-75. (Shane Clanton's current car owner) Ronnie Dobbins and B.J. had met and known each other for years and years, and he said, 'B.J. you just don't pay us enough for us to run your circuit, but you pay too much for us to stay home.' "

Charles Roberts, who along with David Miller purchased the Southern All Star tour from Parker in 2004:

"He was a dear friend, a business associate and a mentor to me. You could write pages about all the things he did. He was just a wonderful person. He will be greatly missed by the people of Southern All Stars and the sport in general."

Jimmy "Pup" Thomas an employee at Hoosier Tire South, who became close friends with Parker while selling tires at many Southern All Stars events over the years:

"At a track early on in the going it turned out the promoter didn't have the money to pay the purse. He came over to me and asked if I would give him the tire money and him write me a check. You could trust B.J. He was a man of his word. He wouldn't let his series not pay the purse. He may not have paid as much as some other series, but he never cut a purse and always did what he said he was gonna do."

"I'm gonna miss him that's for sure, but I feel a whole lot better now that I know I got an angel like B.J. watching over me."

Brian McLeod, publisher of Late Model Illustrated, who as a reporter covered Parker's dirt and asphalt series for more than 20 years:

"A Southern gentleman to the core, truly one of the sport's best story-tellers, and a man who had an unwavering patience and caring approach to dealing with the people in short track racing. He was a fine man with a tender soul, and this is like losing the grandfather you loved so much as a kid. Special people should live in our hearts and minds forever. He's one of them."

Kelley Carlton, one of Parker's proteges who worked with the Southern All Stars from 1999 until 2010:

"I learned so much from B.J. about racing and, really, about people and life in general. He used the same principles in life as he did in racing: Be respectful and friendly. Listen to what others have to say before you form an opinion. Hold no grudges — forgive the guy who is cussing you before he even starts. He always said making friends is far more important than making money. And the man knew how to promote. He was just so smart about the racing business.

"I try every day to live up to the lessons he taught me. He was the first person I turned to when I thought about leaving Southern All Stars. He was the first to tell me I had to follow my instinct and do what I thought was best for me. I can never thank him enough for what he has given to me. I owe my racing career to him. I have never heard a single person in this business utter a negative comment about B.J. People just naturally liked him and were drawn to his wit and charm. The racing industry has yet another big hole that can't be filled."

Lynn Acklin, worked with Parker for 19 years with both the Southern All Stars dirt series and asphalt series:

"B.J. did a lot for racing, both dirt and asphalt. He's the one who got me involved in racing and I ended up working with him for 19 years with both series. He got the asphalt series going at a time when asphalt short track racing was going downhill in the Southeast. That series was able to help really to bring it back.

"One thing he taught me is you gotta look out for the racers, cause without them, you ain't got a series. He did everything he could to help out his drivers and made a lot of friends along the way."

"He was a pioneer. He treated everybody fair and you knew you were gonna get your money at his races. He was just a great friend to all the racers. He wasn't at all the races we ran because he had the dirt series to tend to, but he was really the reason we ran Southern All Stars so much. You could always count on him to do what he said he was going to do."