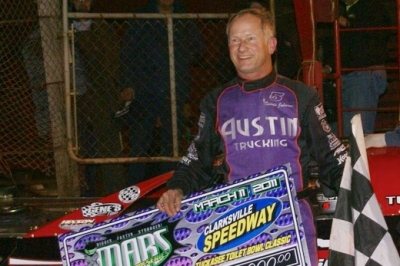 CLARKSVILLE, Tenn. (March 11) — Ronnie Johnson of Chattanooga, Tenn., wrestled the lead from fellow front-row starter Kent Robinson of Bloomington, Ind., on the seventh lap Friday at Clarksville Speedway and led the rest of the way in his first-ever start on the 11-year-old MARS DIRTcar Series.

The 55-year-old Hall of Famer earned $3,000 and earned his second victory of the season as he tries to follow up his spectacular 27-victory campaign from a year ago. | Slideshow

"It's unbelievable to win the races we've been winning at this stage of my career," said Johnson, whose MasterSbilt is powered by an all-aluminum CT525 crate engine. "I really feel blessed to be able to do this, because you never know in this sport which win might be your last one. I'm kinda out of my element here, because it's not a track we come to a lot. Sometimes you're better off going somewhere different because you can get by with doing a few things. You really don't know any better. When we go to tracks where I'm supposed to know what I'm doing, that can sometimes work against you."

But Johnson didn't have any trouble at the quarter-mile oval he lasted visited in 2007 on the Crate Late Model NeSmith Chevrolet Dirt Late Model Series, controlling the race after overtaking Robinson.

"It looked like he was having trouble keeping his car down on the bottom, and I could really keep mine down there," Johnson said. "I figured we were gonna have to lap cars pretty early in the feature because we did that in the heat race. After I passed him, I moved down a little bit to get below the rough stuff."

The 23-year-old Robinson, beginning his first full season in Late Models after an injury-shortened 2010, missed getting his first victory in the division but was pleased with his finish.

"I'm ecstatic and very excited about running second," said the former modified ace who underwent shoulder surgery last June after a wreck at Eldora (Ohio) Speedway reaggravated an injury suffered snowmobiling. "It's not bad at all when you finish between Ronnie Johnson and Ray Cook. Those guys have been racing Late Models for longer than I've been alive. When Johnson got past me, I was slipping up the racetrack in the corners and couldn't hold the bottom. By the time I saw the nose of his car underneath me, it was too late. And once he passed me, he got through lapped traffic a whole lot better than me."

The third-starting Cook held that position at the finish. Jack Sullivan of Greenbrier, Ark., and Brad Looney of Republic, Mo., rounded out the top five finishers in the opening race for Missouri-based MARS.

Robinson took the lead at the outset, and while the leader fought the rough conditions in turns one and two, Johnson slipped underneath exiting turn two on the seventh lap.

As the field hit lapped traffic, Johnson pulled away, maneuvering through lapped traffic better than his pursuers while Cook began to challenge Robinson.

The main event was slowed by a single caution in turn two when David got sideways between turns one and two on the eighth lap. Reigning track champion Dustin Butler spun mostly to avoid him, but both cars ended up in the infield; Butler retired.

Notes: Johnson's MasterSbilt Race Car is sponsored by NeSmith GMC, Simmons Lawn Care and VP Racing Fuels. ... While leading, Johnson once hit a bump wrong in the rough patch, and got airborne in a major way. Team members said the car's driveshaft was visible. "One time, I got a whole lot more air out there than I really wanted, " Johnson said. ... Among drivers failing to make the feature: Tanner English, Terry English, Carnell Parker III, Chris Wall and Sam Epling. ... The previous first-time series winner with MARS came last July 3 when Chad Simpson of Mount Vernon, Iowa, won at his home-state Adams County Speedway. ... MARS competitors return to Clarksville on Saturday for a $5,000-to-win event, the finale on the Tuckassee Toilet Bowl Classic.