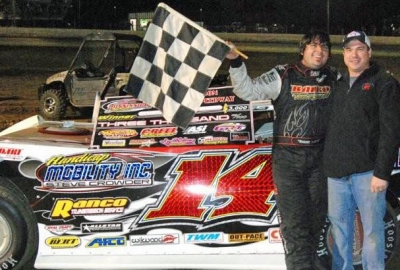 Driving Henry Cooper's No. 14, Hollingsworth started outside the front row, got the jump on polesitter Clint Smith of Senoia, Ga., and led all the way in the 50-lapper. He took the checkers a straightaway ahead of Smith to duplicate his Sept. 11 victory at JMS, also in Cooper's car.

“I’m super-excited to have Ronny Lee in my car,” Cooper said. “Ronnie Lee won down here back in September in front of a great crowd here at Jackson and then this win, in front of this crowd, just puts the icing on the cake.”

Two cautions slowed the action. George Paul spun in turns one and two on the initial restart and a lap-28 yellow appeared when Joseph Joiner and Junior Williams were involved in a minor incident exiting turn four.

Notes: The winning Barry Wright Race Car has a Vic Hill Racing Engine and sponsorship from Country Pleasin' Sausage and Handicap Mobility Inc. ... The event wraps up the season at the Don Cliburn-owned quarter-mile oval. "I promise you 2011 is going to be event bigger," said Cliburn, who completed his third season operating the track. ... Cliff Williams won the night's Crate Late Model feature. ... MSCCS competitors wrap up the season Oct. 9 with a $2,500-to-win event at Greenville Speedway.