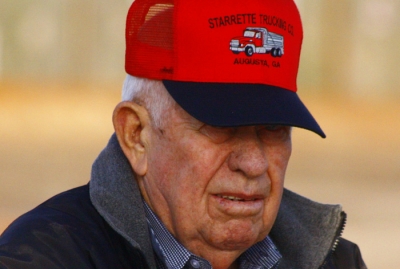 Jack Starrette, a Dirt Late Model team owner of Augusta, Ga., and one of the sport's most prolific sponsors, died Friday afternoon at an Augusta hospital from severe injuries suffered in a Wednesday fall from a front-end loader at the Starrette Trucking sand pit. He was 79.

Few major Dirt Late Model races in the Southeast have been held in the last 20 years without at least one car — and sometimes a half-dozen or more — sporting sponsorship from Starrette Trucking on cars of high-profile drivers including series champions Jeff Smith, Ricky Weeks, Casey Roberts, Ronnie Johnson and more.

Tales of the self-made man's unending generosity flow from drivers: the unexpected gift of a set of tires, loaned equipment of all shapes and sizes, extra cash for drivers struggling with poor finishes and a $400 gift to a driver whose wallet was stolen from his trailer during a race so he could make it home.

"I never met anybody like him. He just always went so far out of his way to help people," said former driver Randle Chupp, who gave Starrette some of his richest victories in his No. 22 car. "It ain't all about money. It's appreciation, you know. Jack always wanted everybody to be appreciated ... it just tears me up to talk about it. He's just a really cool cat, you know? He's just such a generous old soul, so gentle. Jack could be hard when he needed to be hard, but he was so caring and loving."

Chris Ferguson of Mount Holly, N.C., drove Starrette's car in 2010 and enjoyed a whirlwind, 12-hour roundtrip with him to Florida Speedweeks in February to watch a feature race for a mere 45 minutes before doubling back to Augusta.

"He's just one of a kind," said the 20-year-old Ferguson, who frequently prefaces Starrette's surname with "Mr. Jack" when speaking of him. "You can't find many more people like him. He's going to be missed around here more than anything. ... I think racing's going to take a big hit."

Chassis builder Barry Wright was sometimes a rival car owner to Starrette, but the Hall of Famer knows Starrette's death will dramatically change the landscape for racers in northeast Georgia and the Carolinas.

"He supported a lot of teams and never got much in return — I don't think he wanted much in return," Wright said. "There's a lot of guys he's helped who couldn't have raced without his support. He'll be missed."

"He’s been like a grandfather to me," said Smith, who operates J&J Race Cars in Dallas, N.C. "He’s helped so many people in racing, it’s going to be a big void in the racing community in the South because he helped so many people. There were times I saw him go up to somebody and give them $400 or $500 because he enjoyed watching them race somebody. He had a heart of gold. ... Sometimes I know he got taken advantage of on some situations, and he just let it roll off his back and just go right on."

Born in Cool Springs, N.C., Starrette first began racing in the mid 1950s at Hickory (N.C.) Speedway and, after driving race cars himself, evolved into a car owner. His trucking business, which started with a single dump truck in '59 and grew into a fleet of 65 units, afforded him the luxury to support racers great and small over the years.

Sponsoring drivers who called asking for support wasn't Starrette's method. The tall man who always wore a plaid shirt, work pants and cap typically kept an eye out for struggling drivers or a team that needed a helping hand, embracing them as extended family.

"I usually go to the people I see in need and go from there," Starrette told Tony Hammett in an interview for Late Model Illustrated. "I guess I have sponsored about 25 drivers over the years. I have spent a lot of money with some, and not so much with others, but did what I thought was right for all of them.

"I guess some have taken advantage over the years, but I don't keep score like that. I am proud to say that I have never had bad words with any driver I sponsored. I have had some run their lips out when I said no to more money or parts or whatever, but even when I parted company with them, we stayed friends."

"There's just so many drivers you can't even think of all of them," Ferguson said, "and I don't think anybody knows every driver he helped, because he didn't go around telling everybody.

"He was a cool guy. Just one of a kind. He's going to be missed around here. I know a lot of drivers that still have his name on their car. ... it's just kind of an honor for me to be able to drive for him this year."

Starrette deflected the limelight, didn't rush to victory lane for photos and quietly spread his generosity throughout the pits, sometimes even to rival teams.

"He just enjoyed what Dirt Late Model racing is, hard-core, nose-to-nose, go-at-it racing," Chupp said. "That's the kind of racing that southern dirt racing has been about for a long time, and Jack Starrette has been there the whole time."

When Chupp made a stirring worst-to-first rally for a January 2009 victory at Golden Isles Speedway, he dedicated the victory to the memory of Starrette's wife Carolyn, who died a month earlier.

"It seemed like that did a whole lot to cheer Jack up, and it meant a lot to me to run good for him and give him something else to focus on."

Chupp said he was repaid many times over by Starrette's generosity with big and small gestures. If they entered the pits separately, Starrette would always insist on repaying Chupp's pit pass. "He'd pull out like $5 more than what the pit pass was, and laid it on the fender of the car. If you didn't pick it up, the wind was going to blow it away. He was just that kind of guy," Chupp said.

Chupp knows there are other prolific Dirt Late Model sponsors — Kentucky's Bob Miller of Miller Bros. Coal, Wisconsin's Mike Seubert of Seubert Calf Ranches and Illinoisan Ed Petroff of Petroff Towing among others — but says "Jack was No. 1. ... if you've raced anywhere, a Jack Starrette car has outrun you somewhere. ... It's a tragic day for Dirt Late Model racing."

"We’re going to miss him like our right arm," said Ricky Weeks, a five-time Carolina Clash champion. "You’re not just losing a sponsor, you’re losing a friend. It’s going to impact this sport so much, people can’t even imagine what it’s going to do. It’s just going to be unbelievable."

Starrette died at the Medical College of Georgia in Augusta. Survivors includes a son, Roger; a granddaughter, Lauren; and a brother Herm, a former major league baseball pitcher and a coach on the Philadelphia Phillies 1980 World Series championship team. His wife Carolyn Hollar Starrette died in December 2008 after 52 years of marriage.

Services are scheduled for 1 p.m. Monday, Aug. 23, at Lakeside Baptist Church in Clearwater, S.C., with interment following at Sunset Memorial Gardens in Graniteville, S.C. Visitation is scheduled for 6-8 p.m. Sunday, Aug. 22, at Hatcher Funeral Home & Cremation Service in Langley, S.C., as well as an hour before Monday's service. Memorials may be made to Lakeside Baptist Church, P.O. Box 1730, Clearwater SC 29822.