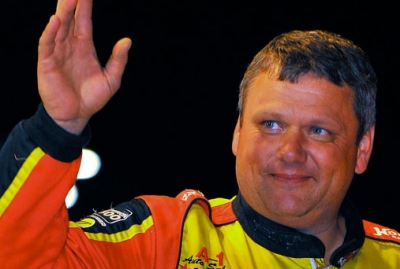 This year, O'Neal hopes he stops on the frontstretch after the Aug. 13-14 race at Florence Speedway in Union, Ky., to pick up the winner's trophy instead of giving the runner-up interview. | Complete North-South 100 coverage

O'Neal, a 46-year-old racer from Martinsville, Ind., heads to Florence still looking for his first crown jewel victory in Dirt Late Model racing as the half-mile oval hosts an event that pays an impressive $2,500 to each starter.

O'Neal has had plenty of success in a Late Model career that started at Brownstown (Ind.) Speedway in 1990, capturing Brownstown's Jackson 100 three times, the Magnolia State 100 in 2006 at Columbus (Miss.) Speedway and a $55,000 triumph in 2003 at Dixie Speedway in Woodstock, Ga. But he's never tasted victory in a race considered one of the sport's crown jewel events.

O'Neal's familiar No. 71 appeared headed for a victory at last year's North-South 100, dominating most of the race before the 15th-starting Mars rallied to catch the leader in the final laps. Mars edged ahead heading for the white flag and left O'Neal wondering what might've been.

"It sort of bothers you. You aren't a racer if it didn't," O'Neal understated while graciously answering repeated questions after last year's defeat. "We were just one lap short. We ran our hardest and did everything we could do. There wasn't anything else we could do. He was just better than we were at the end. We just needed it to be 99 laps, I guess."

O'Neal has made some noise in earlier crown jewels this season. He was a solid second to Ray Cook in May's DART Show-Me 100 at Lucas Oil Speedway in Wheatland, Mo. He was seventh in the $100,000 Dream at Ohio's Eldora Speedway, an impressive effort after being forced to advance through the C-main and B-main. And last weekend at Cedar Lake Speedway in New Richmond, Wis., O’Neal set fast time for the $50,000-to-win USA Nationals and led 18 laps early before his overheating car was forced to the pits.

O'Neal is in his second second driver the Tader Masters-fielded MasterSbilt house car for the Crothersville, Ind., chassis builder. O'Neal started off with the team in March 2009 driving the team's show car they used to display at off-season trade shows while a new one was being built.

“When we hired Don, I told him at dinner, I know you are a hard-charging driver, but please bring the car home in one piece, so I am not having to replace the right side body panels each time,” said the 50-year-old Masters. “He listened to what I said and he has done a real good job."

In the past three Lucas Oil Series events, O'Neal has a pair of fast times and led 54 laps between races at Fonda (N.Y.) Speedway and Hagerstown (Md.) Speedway, but couldn't close the deal at either event.

“Our qualifying program is good right now, like every race we run, qualifying is so important and this weekend at Florence is no exception. Plus there’s $1,000 up for grabs for fast time, we’ll shoot for that,” O’Neal said, referring to the Red Buck Cigars bonus for at Friday's time trials. "Setting fast time would be great, but winning the race on Saturday night and that $50,000 would go along ways to ease the disappointment from last year."