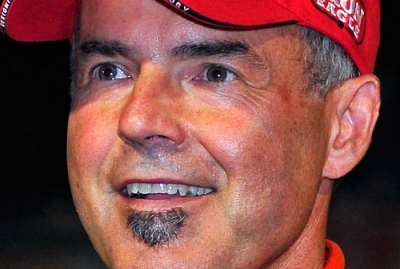 Cedar Lake Speedway’s deep history with the World of Outlaws Late Model Series will be rekindled when the national tour returns to the Badger State track to sanction the 23rd annual USA Nationals presented by U.S. Steel on Aug. 5-7. And if Dirt Late Model Hall of Famer Billy Moyer ends up battling for the 100-lap event’s $50,000 top prize, it will seem just like old times at the high-banked, 3/8-mile oval. | Complete USA Nationals coverage

Moyer, 52, of Batesville, Ark., owns a spectacular performance record in WoO competition at Cedar Lake, winning seven times and never finishing worse than fifth in the 10 tour races there. All of his victories came in 1988 and 1989 during the short-lived first incarnation of the series run under the direction of late WoO sprint car series founder Ted Johnson, but he was close to another checkered flag in the only Cedar Lake event of the WoO’s modern era (2004-present), finishing second in the 2005 USA Nationals.

A three-time WoO champion (1988-89, 2005), Moyer fondly, albeit a bit vaguely, recalls his amazing run of Outlaw success at Cedar Lake some two decades ago. He was beaten just once in five events in 1988 (by current Cedar Lake regular and perennial titlist Rick Egersdorf of Lake Elmo, Minn.) and once in four events in 1989 (by Donnie Moran of Dresden, Ohio). Moyer capped both years with triumphs in the first two USA Nationals — then 50-lap features worth $12,000 to win in ’88 and $14,000 in ’89 — on his way to an all-time event-record five victories.

“It seemed like we had a handle on the place back in the day,” said Moyer, who also won the USA Nationals in 1990, 1992 and 1993 when it carried sanctioning from DIRTcar Racing’s UMP circuit. “There were a lot of good racers from out that way back then that everybody might not have heard of — guys like Willy Kraft — but I think we were a step ahead of a lot of them with how we done our tires and our chassis.

“You could keep an advantage a little longer in those days, and I guess I just had some things I understood about the car that I kept to myself. Today, with all the chassis builders involved, they pass all this information on to all their customers and it’s harder to hold on to an edge like we did when we were winning all those races every year (at Cedar Lake).”

Moyer’s Cedar Lake strength in 1988-89 was an extension of the superiority he demonstrated during the original WoO campaigns. He won 22 of the 41 features run those two years, a lofty win percentage that he would have loved to pad in successive seasons. Unfortunately, Johnson discontinued the series after the 1989 season to focus on his sprint car endeavors and it sat idle until resuming in 2004 under the World Racing Group banner.

“I was really surprised when (Johnson) decided to pull the plug,” Moyer said. “I honestly think that if he just held on one more year it would probably be right there where the (WoO) Sprint Cars are right now instead of still growing. Right when he quit doing it there were just a few professional-type racers doing it for a living, but there were getting to be more and more and that would have kept the deal growing without that little empty spot (of 15 years) in there.”

Today the WoO is trying to realize the full potential that Moyer saw in it more than 20 years ago. The tour’s return to Cedar Lake for the USA Nationals — a crown-jewel event that, with its $250,000-plus purse, ranks as the country’s highest-paying dirt Late Model race — adds more prestige to a 2010 schedule that currently lists 47 events at 40 tracks in 19 states and two Canadian provinces.

Moyer is expected to enter the blockbuster event as a favorite — not very shocking, of course, considering he’s tearing up the Dirt Late Model world this season like it’s 1989. With 16 overall feature wins through mid-July, Moyer is proving that he hasn’t lost anything off the fastball that he flashed at Cedar Lake during the early years of the USA Nationals.

One of Moyer’s victories this season came at Cedar Lake, on June 18 in the first half of the Masters weekend doubleheader that was part of the UMP DIRTcar Summernationals. That outing made him realize once again how much he likes the speedway.

“The racetrack has always been fun,” said Moyer, who owns 100-lap victories this season in the Dream XVI at Ohio’s Eldora Speedway (worth $100,000) and the WoO Illini 100 at Farmer City (Ill.) Raceway. “I think it’s sort of the right size for me. I just think a smaller place is a better show for the fans, and it’s been one of those places where you have to chase the racetrack around. I like that quality in a racetrack.”

Moyer towed his Victory Circle Chassis to last year’s USA Nationals but failed to qualify for the headliner after a consolation scrape cost him too much valuable ground to make up. He felt he was more a victim of circumstance than performance, however, fueling his desire to return to the upper Midwest in search of his first USA Nationals victory in 17 years.

“Do we have to run better last year? Yeah,” said Moyer, whose USA Nationals ledger shows only two top-five (second in 2005, fourth in 2008) and four top-10 finishes since his last triumph in the event. “But we were right there with the car last year. We had some crazy stuff happen trying to get in the race, but I think we could’ve raced OK once we got in the 100 lapper.”