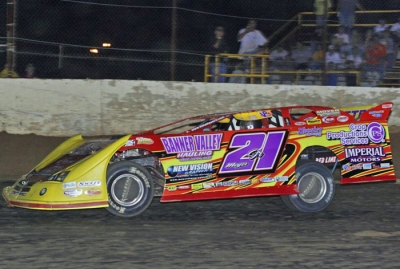 Frye took the lead at the outset, but Moyer was alongside by the third lap and the two battled before Moyer took command on lap five.

As Moyer inched away from the field, Frye and Kirby battled for second while Beard slipped off the backstretch and out of the top five on the 10th lap, dropping back to 14th.

Next it was Frye slipping off the track as he jumped the cushion on lap 22 and lost several spots, but he was saved by a caution that reset the field with Frye in second.

Despite the field being bunched on the restart, no one had anything for Moyer. Beard continued to recover from his earlier miscue and re-entered the top five. He took second from Frye late in the race, but didn’t have enough time to catch Moyer.

Notes: Moyer’s Victory Circle Chassis is sponsored by Imperial Motors, Banner Valley Hauling, and Karl Chevrolet. ... The victory was Moyer’s sixth overall in 2010. ... The series was back in action one night after the cancellation of Friday’s race at Malden (Mo.) Speedway. The action was halted after an accident in a consolation race that resulted in the death of a track worker. ... Joey Mack’s 18th-to-eighth run gave him the Larry Shaw Race Cars Hard Charger honors. ... The Quartermaster Hard Luck award went to Terry Henson, who had the fan blade break in the feature, which knocked the plug wires loose and ended his night. ... Among drivers failing to make the feature: Stormy Derryberry, Alan Rettig, Wesley Crutchfield and Austin Rettig. ... The series heads for an Aug. 6-7 weekend at USA Speedway in Sterlington, La., and I-30 Speedway in Little Rock, Ark. Those two events wrap up the RiceTec Summer Showdown.