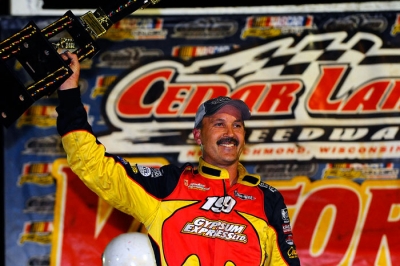 Tim Fuller made quite an impression on Cedar Lake Speedway’s fans during his first-ever visit to the Badger State track one year ago.

The resident of Watertown, N.Y., is hoping to earn even more attention from the 3/8-mile oval’s faithful when he returns on Aug. 5-7 for the 23rd annual USA Nationals presented by U.S. Steel, which this season is part of the World of Outlaws Late Model Series that Fuller follows on a full-time basis. | Complete USA Nationals coverage

“We had a great time at Cedar Lake last year,” said Fuller, a superstar in the Northeast’s big-block modified ranks before switching his focus to the Dirt Late Model division in 2007. “I really liked the place and the whole atmosphere of the event — they host a very good party. I would love to go back there this year and win the big one.”

Fuller, 42, sparkled in his 2009 Cedar Lake debut, winning the traditional Thursday-night tuneup event that was then run under the World Dirt Racing League banner (this year’s $5,000-to-win preliminary show, on Aug. 5, will be sanctioned by DIRTcar Racing’s UMP circuit) and finishing second in Saturday’s 100-lap USA Nationals finale. He led 54 of the first 56 laps in the headliner before being overtaken by Jimmy Mars of Menomonie, Wis., who went on to capture the prestigious race’s $50,000 top prize for the second time in his career but first since 1996.

Last year’s assault on the unsanctioned USA Nationals was a last-minute decision for Fuller, who headed to the upper Midwest just days after he snapped a 46-race winless streak on the WoO with a triumph at Sharon Speedway in Hartford, Ohio. He sure was glad he made the trip after pocketing $25,000 for his weekend of work, including a $20,000 runner-up check from the USA Nationals’ industry-leading $250,000-plus purse.

“You don’t see me get passed for the lead and finish second and still smile,” an upbeat Fuller said after last year’s USA Nationals. “I got beat by a guy that had the better car.”

Fuller, who started second in the USA Nationals, conceded that he simply wasn’t strong enough to repel Mars once the track surface changed midway through last year’s event.

“We were really good on Thursday night and we were rolling for the first half of the 100-lapper,” said Fuller, who followed up his ’09 USA Nationals performance with a record-tying four-race win streak on the WoO LMS. “But we weren’t as good in the (hard) condition as Mars was. I had to slow down so much in the corners to stay on the bottom, and he was free enough to draw up on the outside and roll by me.

“I would’ve loved to win that race, but hey, it was our first time there and Mars was really going good at the time, so I couldn’t be disappointed. We’ll just go back and hope what we learned last year will help make us better.”