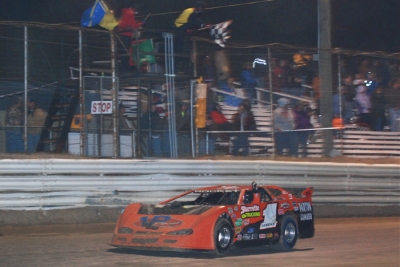 A pre-race squabble over Weeks' tire change after reaching the starting grid was the only doubt to his victory as the fast qualifier led all 50 laps at the 4/10-mile oval.

Weeks had been struggling with his Rocket Chassis in recent weeks, but he got things ironed out for the late-season action at Dublin. "Well, I found a lot of stuff wrong with the car this week," he said. "We'd been chasing it for three or four weeks and we found something major wrong, and we fixed it. It was the transmission, it was binding up where the transmission goes in and out, and I'll tell you what, it fixed it."

While Weeks made a change to the transmission earlier in the week, an attempted tire change before the race caused a little controversy.

"When I got out on the track, I didn't like the tire I had on the right rear, so I asked the official if I could come in and change it, and he radio'd up there and they told him yes," Weeks said. "So I came in and changed it. And then when I came back out there, they were raising hell, so I told the guy, 'If it'll make ya'll happy, I'll just go back and change it back. It ain't no big deal.' So I changed it back. They probably did me a favor by switching it back. I didn't know that was the rule. That's the reason I asked.

"When I got out there, the track was black, and I felt like I just needed to be harder on the right rear, but obviously I didn't need to be. So they just did me a favor."

Weeks' Rocket Chassis is sponsored by Starrette Trucking, Parton Lumber and VP Fuels. ... Weeks' fast qualifying time of 15.599 seconds was more than three-tenths of a second quicker than Chris Meadows of Beckley, W.Va., the second-fastest qualifier. ... Meadows got hung up in an accident with Austin Hubbard. ... Ten drivers finished on the lead lap with former Ohio driver Jason Altiers a lap down in 11th. ... Maryland visitor Jamie Lathroum had to adjust to what he called a "wide open" track with plenty of traction. "We didn't change a lot. The driver just changed a little bit to adapt to the track a little bit," he said. "We're used to them slick tracks where you start out wide open and by the end of the night you're kind of running half-open, that's about it." ... Consolation race winners were Furman Parton, who rallied to finish fifth in the feature, and Ray Tucker. ... The track's Limited Late Model champion, Willie Milliken, won that division's feature over Dustin Mitchell and Timmy Blackwell. (Information provided by Thomas Pope of the Fayetteville Observer)